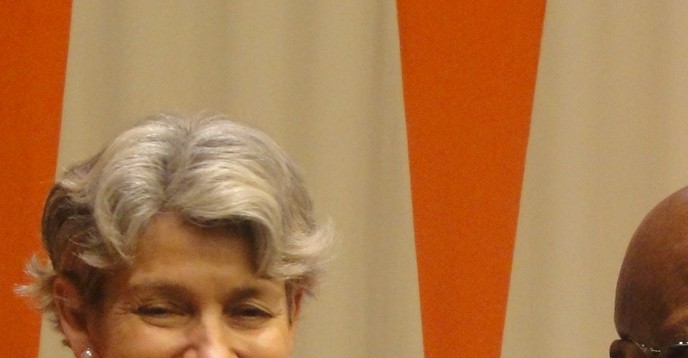 On 25 September, UNESCO Director-General Irina Bokova joined world leaders to mark the first year anniversary of the Global Education First Initiative, a five-year campaign launched by UN Secretary-General Ban Ki-moon to deliver on the promise of Education for All. Building on the momentum created over the past twelve months, the meeting focused attention on how to leverage the leadership, financing and delivery needed to achieve the 2015 goals.


‘We have rallied new partners, we have mobilized new sources of support and we have catalyzed stronger political will’, Director-General Bokova stated in her opening remarks, but, she went on, ‘this is just the beginning – we must accelerate, through more sharply targeted policies, through stronger collective efforts’. UN Secretary-General Ban Ki-moon echoed this sense of urgency in his remarks. ‘We celebrate today, but we also face tough facts’, he warned, referring to the drop in aid to education and persistently high numbers of children denied the opportunity to go to school and learn. Ban Ki-moon called on the international community to end such exclusion. ‘If we put education first, a life of dignity will follow’, he affirmed.

The transformative power of education was a central theme in the opening session of the GEFI anniversary event, which brought together education leaders in a panel discussion moderated by UN Special Envoy for Global Education, Gordon Brown. Asked to identify the types of actions needed to deliver a breakthrough in education, panellists put strong emphasis on the need for top-level political commitment, broader partnerships, and a renewed focus on addressing the obstacles to learning, in particular those facing girls.  ‘We need to put the girl child first’, Prime Minister Sheika Hasina of Bangladesh urged, with President Ivo Josipovic of Croatia insisting that ‘education must be universally accessible to all’. The CEO Dangote Industries, Aliko Dangote, put the accent on the role and responsibility of business in championing global education, with pianist and UNICEF Ambassador, Lang Lang, calling on the international community to work together to bring down the barriers to education. ‘We’ve got to dream of a better world, we’ve got to have idealism, Archbishop Emeritus of Cape Town, Desmond Tutu, told the audience. Education advocate, Malala Yousafzai, likewise enjoined participants to act on their convictions, in particular in support of the right to education for children in countries affected by conflict and instability. ‘Instead of sending weapons, send books. Instead of sending soldiers, send teachers’, she urged.

Powerful statements were also delivered in support of education by the President of the People’s Republic of China, Xi Jinping, the newest Member State to sign up as a GEFI Champion Country, and Jamira Burley, a member of the GEFI Youth Advocacy Group.

A second series of speakers were invited by Gordon Brown and the President of the World Bank, Jim Kim, to address the specific challenge of improving the coordination of education financing and delivery. Highlighting the central role of education in driving country competitiveness, job creation and economic growth, President Kim asked speakers to focus on concrete actions to ‘create the first generation in history where every child goes to school and learns’. Participants in the ensuing discussion included the Presidents of South Africa, Guyana and Mozambique, ministers of education and heads of bilateral and multilateral institutions. Their statements coalesced around what Gordon Brown highlighted as the three core challenges in education finance and delivery: widening the circle of partners that fund global education; improving coordination; and focusing more sharply on the most marginalized.

The anniversary celebration concluded in the evening of Wednesday September 25 with the release of the recommendations of the Learning Metrics Task Force (LMTF), aimed at filling the global data gap on learning and helping to build country-level capacity for measuring progress. The Task Force is a joint initiative led by the Brookings Centre for Universal Education and UNESCO’s Institute for Statistics, with other partners. Speaking alongside UNESCO Director-General at the launch were Her Majesty Queen Rania of Jordan, President Ellen Johnson Sirleaf of Liberia, President Moncef Marzouki of Tunisia, UNICEF’s Deputy Executive Director, the Brookings Institution, the teaching community and the GEFI Youth Advocacy Group. Summing up what she described as “an educational marathon” at the UN General Assembly, the Director-General stated that ‘ New York has never seen such energy around the prime importance of education – and not just education, but quality education, to ensure that all children have the possibility to learn. This is where we need to put the emphasis – on knowledge, skills and responsible citizenship, through partnerships and a collaborative approach, and by holding government  accountable. The right time is now because education lies at the heart of the sustainable development agenda – to improve health, protect the environment, and achieve gender equality. Let us mobilize this energy to get all children into school, hire qualified teachers and achieve the goal that we have set for the poast-2015 agenda – Equitable Quality Lifelong Education and Learning for All.”