UNESCO Director-General inaugurates Exhibition on The Balkans – A Shared Heritage 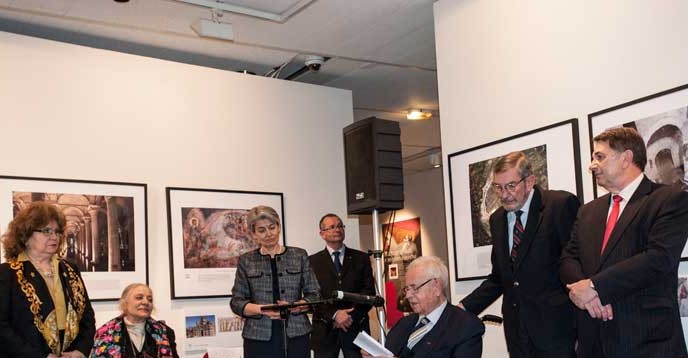 On 17 March 2015, UNESCO Director-General Irina Bokova inaugurated at UNESCO’s Paris Headquarters the exhibition entitled The Balkans – A Shared Heritage, organized by the Permanent Delegation of Bulgaria to UNESCO, in cooperation with the Dutch Horizon Foundation. The Minister of Education of Bulgaria, H.E. Mr Todor Tanev and Deputy Minister Vania Krasteva participated in the inauguration.


The exhibition offers an insight into the diversity of the cultural heritage of the Balkans, brilliantly captured by the renowned Bulgarian photographer, Ivo Hadjimishev.

The exhibition includes images of sacred places, religious objects, and cultural heritage sites, namely, for instance, the Painted Mosque of Tetovo in the former Yugoslav Republic of Macedonia, the Prayer Book for Rosh Ashana from the synagogue in Bulgaria, the Sucevita Monastery in Romania.

“This exhibition is an outstanding example of solidarity and cooperation among diverse ethnic and religious communities, in a region that bridges Europe and the Middle East,” declared the Director-General. “The photos of the bridge and the old town of Mostar - eleven years after their renovation and ten years after their inscription on the World Heritage List - remind us of the power of culture to strengthen dialogue and reconciliation. This heritage is a source of social cohesion -- it is also a source of creativity and innovation”.

The Permanent representative of Bulgaria to UNESCO, H.E. Mr Alexander Savov thanked the author of the exhibition Ivo Hadjimishev for his noble idea to present in photos the rich cultural heritage of Southeastern Europe and added: “Against the backdrop of continuing attacks against the cultural heritage of mankind in Syria, Iraq, and other countries affected by armed conflict, this exhibition is a reminder of the need to preserve and promote the common heritage”.

The inauguration occurred in the presence of a wide range of Permanent Delegates to UNESCO, as well as intellectuals and public figures.