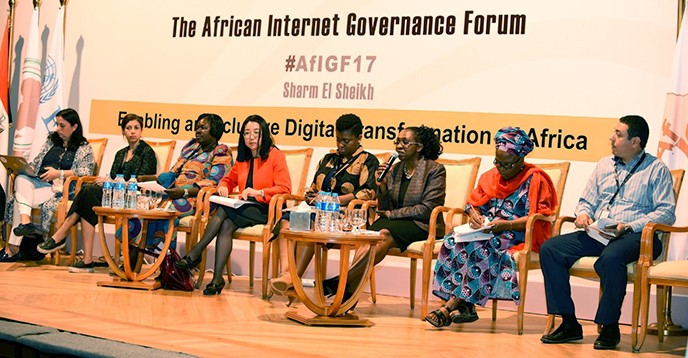 Consulted on the future finalization of the draft Internet Universality indicators, the participants of  UNESCO consultation event held in Egypt stressed the importance of developing effective mechanisms to monitor Internet freedom including online freedom of expression and privacy at the national level as well as ensuring the participation of multiple actors in Internet governance.

UNESCO launched the second phase of its project to develop Internet Universality indicators at the fifth African School on Internet Governance, the first North African IGF and the sixth African IGF and took the opportunity to consult with African stakeholders gathered in Sharm El Sheikh, Egypt from 28 November to 6 December 2017. Representing UNESCO, Xianhong Hu presented the first draft Internet Universality indicators which combine both qualitative and quantitative indicators. The framework of indicators will seek to help governments and other stakeholders to assess online Rights, Openness, Accessibility, and Multistakeholder participation (known as the R-O-A-M principles). These first draft indicators are an interim outcome from UNESCO’s first phase of global consultation, which lasted from 29 March to 31 October 2017, included 24 face-to-face consultation meetings in 21 countries, and resulted in 165 online contributions.

The participants shared their views about how efficient the indicators would be to tackle issues related to online rights, including censorship, surveillance, protection of digital sources for journalists, or online harassment and intimidation. As underlined by Chris Kabwato from Highway Africa, these Rights indicators are especially important since “increasing challenges are witnessed widely in African countries concerning online freedom of expression, freedom of information, privacy, personal data protection, artistic expression and right to cultural and linguistic diversity in cyber space”. Other participants insisted on the online rights of migrants and refugees and said that “in the light of very strict laws in establishing NGOs, the Internet has become the last resort for refugees and migrants to discuss their own issues.”

On Openness indicators, some participants pointed out that “open data should be measured within a broader context, especially to see how digitized data are being used for public good, not only by governments but also by civil society and other stakeholders”.

Consulted on the Accessibility indicators, Koliwe Majama from the Association for Progressive Communication (APC) stressed the importance of measuring “the extent to which various local communities can preserve their own cultural knowledge, and express themselves artistically or politically.” Other participants said that “in order to reach accessibility, increasing media and digital literacy is vital”. Ephraim Percy Kenyanito from ARTICLE 19 Eastern Africa noted that “it would be easy to increase access if we could use the money currently spent by governments on surveillance”.

Regarding the Multi-stakeholder indicators, participants talked about how to measure a multistakeholder process and balance the different stakeholders’ interests. Xianhong Hu presented UNESCO’s new publication What if we all governed the Internet? Advancing multistakeholder participation in Internet governance which shares good multistakeholder practices based on inclusiveness; diversity; collaboration; transparency; equality; flexibility and relevance; privacy and safety; accountability and legitimacy; and responsiveness.

Several crosscutting issues were also raised by the participants. Most participants stressed the link between Internet Universality indicators and the implementation of the Sustainable Development Goals (SDGs). Xianhong Hu confirmed that the Internet Universality indicators aim to highlight the Internet’s crosscutting role in enabling States to achieve all SDGs, along with other UNESCOs’ global priorities such as advancing gender equality and empowering youth through Internet governance.

This event was part of the four regional consultation fora that UNESCO will conduct globally to improve the draft Internet Universality indicators. UNESCO also welcomes online contributions in the six UN official languages until 15 March 2018. The indicators will be finalized and launched by June 2018. The project is being led by UNESCO in partnership with the Association for Progressive Communications Consortium and with the support of the Swedish International Development Cooperation Agency (Sida) and the Internet Society (ISOC).