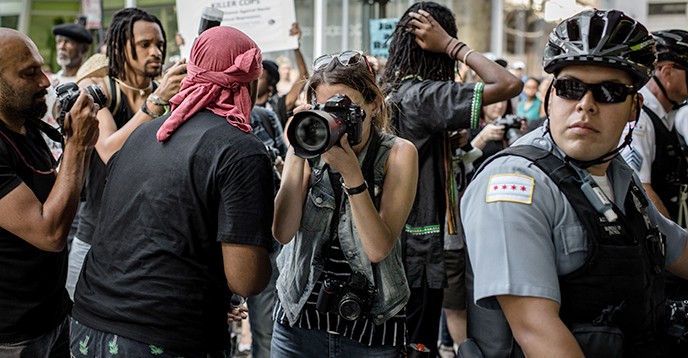 Events at UNESCO Headquarters focusing on the safety of journalists and human rights in the modern world on 12 December will mark the beginning of the year-long observance to mark the 70th anniversary of the adoption of the Universal Declaration of Human Rights, which informs all of the Organization’s work all year, every year.

Starting at 10 am on 12 December, UNESCO Director-General Audrey Azoulay will open the event on National Initiatives on the Safety of Journalists - What Works? It will feature presentations by experts from Afghanistan, Colombia, Kenya, Serbia and Sweden about concrete measures taken by countries to improve the safety of journalists and media workers, 800 of whom are known to have been killed in the last decade. The presentation will be followed by a debate.

The event is organized with the Group of Friends on the Protection of Journalists (a group of Member States of UNESCO committed to strengthening the protection of media workers and the accountability for the crimes committed against them, with counterpart groups in New York and Geneva). The human rights focus in this area reflects UNESCO’s longstanding advocacy and work on freedom of expression, freedom of information, and media development (see dedicated page and links posted to its right).

UNESCO leads the UN Plan of Action on the Safety of Journalists and Issue of Impunity, as well as annual commemorations of the International Day to End Impunity for Crimes Against Journalists. The Organisation also led a global consultation during 2017 on how to strengthen the UN Plan of Action, and is envisaged as co-ordinator of the new network of focal points on safety within the UN system, which is one of the options in the Outcome Document of the consultation.

Also on 12 December, there will be a UNESCO Campus on Human Rights Today with the participation of distinguished French cartoon artist and political satirist Plantu. This will be the 50th edition and the 3rd anniversary of the UNESCO Campus, a regular outreach programme to involve young people in the Organization’s work. Other notable participants in the event will include Shekéba Hachemi, Afghanistan’s first female diplomat and founder of the NGO Afghanistan Libre which works to improve girls’ and women’s access to education, and UNESCO Human Rights programme specialist Konstantinos Tararas.

Fostering Freedom of Expression, Media Development and the IPDC, Safety of Journalists