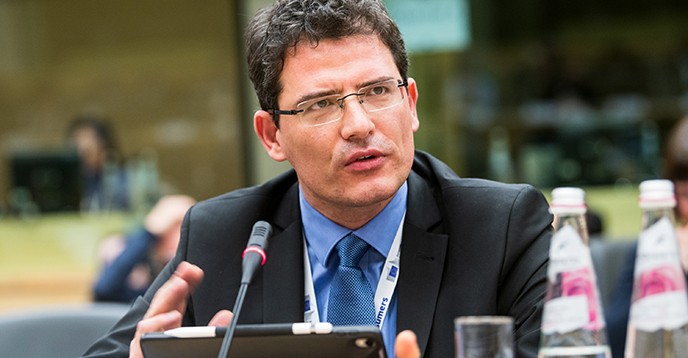 On 27-28 November, the European Commission organized in Brussels the EU Annual Colloquium on Fundamental Rights 2018 focusing on democracy and the strengthening of a pluralistic online media environment in times of elections.

While social media have greatly increased the space for civil engagement and information sharing, it has also allowed for the spread of disinformation, online abuse and hate speech. How should the obligation to guarantee the freedom of expression be balanced with the need to provide protection from abuse and manipulation? How to ensure free and fair elections and a pluralistic political debate online? These important questions were at the forefront of the discussions of the EU Annual High-Level Colloquium on Fundamental Rights, which took place in Brussels on 26 and 27 November 2018 and convened by First EU Vice-President Frans Timmermans under the theme “Democracy in the EU”.

UNESCO’s Assistant Director-General for Communication and Information, Mr Moez Chakchouk, addressed the participants during in a roundtable session gathering among others, EU Commissioner for Justice and Consumers Věra Jourová and Cambridge Analytica whistle blower Christopher Wylie.

“Disinformation is not a new phenomenon. It is essentially the scale of the phenomenon that is problematic. That said, we should have an optimistic approach and not consider it as a fatality, but more as an opportunity to reconsider and rebuild our media ecosystem currently in crisis,” Mr Chakchouk highlighted in its impulse statement.

Mr Chakchouk highlighted UNESCO’s strong commitment in ensuring an independent and plural media environment allowing free and democratic elections and how the organization is developing new instruments to guarantee the pluralism of online information during election period. Drawing the attention of the audience to a new curriculum for journalists and their trainers on disinformation, he underlined the importance to prepare journalists to detect misinformation, not to fall into the trap of instantaneity by relaying information without having verified beforehand. Mr Chakchouk also underlined the need to ensure that critical thinking becomes a core skill so that everyone can detect disinformation and interact with new technologies. In that respect, he highlighted that UNESCO promotes the integration of media and information literacy into formal, non-formal and informal education. Finally, Mr Chakchouk reminded the participants of the importance to enhance professional election reporting as well as safety of journalists and their right to work without threat, in particular during electoral periods.

The 2018 annual Colloquium on Fundamental Rights brought together politicians, researchers, journalists, NGOs and activists. This year’s focus on Democracy was chosen in view of the upcoming European elections of May 2019, the fear of rising populism, low turnout in elections, threats of digitalization and its impact on the integrity of the elections. A new Eurobarometer survey on Democracy and Elections published for that event shows that a majority of EU citizens are worried that disinformation campaigns, data breaches and cyberattacks will interfere with electoral processes.

“This survey confirms that Europeans know that the upcoming elections will not be business as usual. We are fighting against illegal data manipulation, countering disinformation and make our elections more resilient. We can only address peoples' concerns if we do this together," said Vĕra Jourová, European Commissioner for Justice, Consumers and Gender Equality:

Mr Chakchouk met with Ms Jourová and raised the opportunities and challenges behind the use of social media in times of elections and the importance of joint approaches and collaboration in that area but also in the field of Artificial Intelligence, a new priority for UNESCO.

A recording of the event is available to watch here.