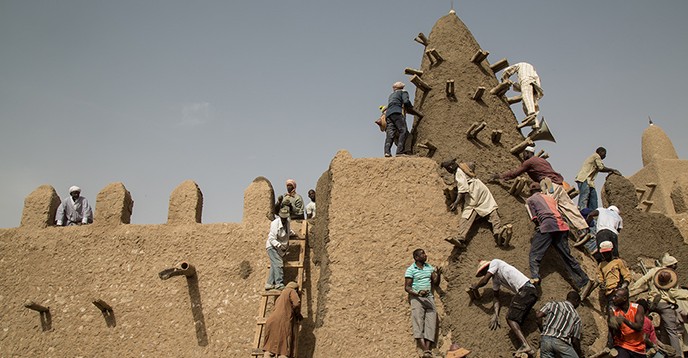 “Culture is a key source of resilience, reconciliation, and social cohesion for cities and communities,” says Ernesto Ottone R., UNESCO’s Assistant Director-General for Culture. “As the partnership of UNESCO and the World Bank across the world has already illustrated in Haiti, Mali, Bosnia and Herzegovina, a focus on the safeguarding of culture is critical for post crisis recovery and reconstruction processes.”

With an estimated 70% of the global population living in cities by 2050, fast-growing urbanization around the world exposes cities and their inhabitants to the devastating effects of increasingly complex conflicts, crises, and disasters. Natural hazards such as storms, floods, and earthquakes are becoming more intense and frequent, with a disproportionate impact on urban areas. Armed conflicts force millions of people to flee their homes and cause widespread destruction in cities. Both are having a devastating effect on culture. By 2030, it is estimated that disasters will cost cities around the world some US$314 billion a year, nearly twice as much as the average over the previous 15 years.

How can countries and cities best prepare themselves to address effectively the increasing crises generated by acute urban pressure? The approach outlined in the Position Paper integrates culture into sustainable urban development policies to help build inclusive, safe, resilient, and sustainable urban environments for all.

“Culture should be placed at the heart of post-disaster and post-conflict city reconstruction and recovery strategies,” says Ede Ijjasz-Vasquez, Senior Director of the World Bank’s Social, Urban, Rural and Resilience Global Practice. “The World Bank and UNESCO share this value and commitment through the CURE framework we developed jointly, to offer policymakers and practitioners operational guidance for planning, financing and implementation of post crises interventions.”

Culture at the heart of people, spaces, and city recovery policies

UNESCO and the World Bank advocate that culture is the foundation upon which cities are built.  Cities are not just a collection of buildings but are people, their stories, and how they interact with each other through their cultural identity and sense of place. At both the foundation and intersection of people and places lies the “X factor” of culture.

Through cultural heritage and creativity, culture is essential as both an asset and a tool for city reconstruction and recovery.   While place-based strategies prioritize the reconstruction of physical assets, people-centered strategies can strengthen community ownership and social inclusion, improve livability of the built environment, and accelerate the socioeconomic recovery of cities.

For example, when one of Bosnia and Herzegovina’s most recognizable landmarks, the 16th-century Ottoman bridge Stari Most, or “Old Bridge”, was destroyed in 1993 during the Bosnian War, local communities demanded and prioritized a full rebuilding of the original bridge. Subsequently, international efforts supported by UNESCO and the World Bank helped rebuild the Old Bridge and restore the Old City of Mostar. Now a UNESCO World Heritage Site, the restored Old Bridge and Old City of Mostar attract tourists from around the world, creating jobs and revitalizing the local economy.

The new framework emphasizes that effective city reconstruction and recovery programs require that culture be mainstreamed across the damage and needs assessments, as well as in policy and strategy setting, financing, and implementation.

“The CURE Framework marks an important milestone in the ongoing partnership between the World Bank and UNESCO to advance sustainable urban development by investing in culture, urban regeneration, and resilience in an integrated manner,” says Sameh Wahba, World Bank Director for Urban and Territorial Development, Disaster Risk Management and Resilience.

The Position Paper draws upon global experience to demonstrate progress being made on the ground. Whether it is building a citizenship culture in Medellin, Colombia to counterbalance the city’s violent past or fostering peace-building through transparency and community engagement in Banda Aceh, Indonesia, culture is the centerpiece.

In Iraq, the World Bank and UNESCO are preparing to collaborate on the rehabilitation of Mosul, building on the CURE Framework, as part of UNESCO’s “Revive the Spirit of Mosul” initiative and the World Bank’s Emergency Operation for Development project.