“There is no way back on this matter now”.

These were the words of Prof. Veena Sikri, the convenor and founding member of South Asia Womens Network (SWAN) after the inaugural ceremony of the organization’s 9th Annual General Meeting, which took place in Kathmandu, Nepal on 19-21 November 2017. The Annual General Meeting was accompanied with a special session involving the SWAN Gender and Media Group who presented secondary researches on gender and media from nine countries in in South Asia.

Prof. Sikri’s comments came after the inaugural address by H. E. Mr Amiad Hussain B. Sial, the Secretary General of the South Asian Association for Regional Cooperation (SAARC). During his speech, the Secretary General expressed his organization’s support for the promotion of Gender and Media in the SAARC region. He also acknowledged the excellent work done by SWAN and UNESCO in promoting gender equality.

Through the project “Building a Gendered Media for South Asia”, SWAN and UNESCO field offices in Asia (New Delhi, Bangkok, Dhaka, Islamabad, Kabul, Kathmandu and Myanmar) are engaged in the application of the UNESCO Gender Sensitive Media Guidelines for the media in Afghanistan, Bangladesh, Bhutan, Maldives, Myanmar, Nepal, Pakistan and  Sri Lanka. The main objective of the project is to contribute to the development of a peaceful and gender transformative media environment in South Asia in order to address the vulnerability of women and alleviate gender inequalities in South Asia. 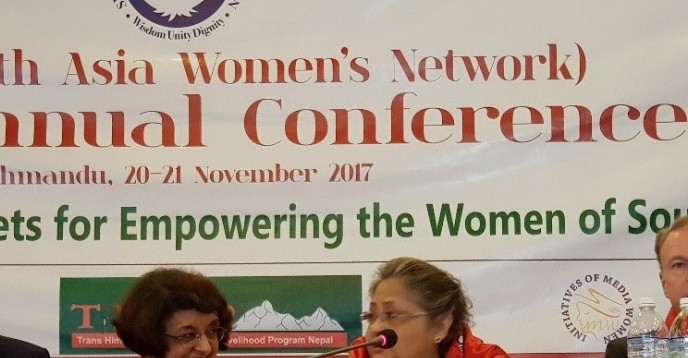 H. E. Mr. Amiad Hussain B. Sial (SAARC S.G), Prof Veena Sikri (Convenor of SWAN) and Mr. Manhart Christian (Director of UNESCO office in Nepal) were among the dignitaries who participated during the inaugural ceremony
© UNESCO

Understanding the potential and role of the media in tackling gender inequality, the UNESCO and SWAN project has involved media stakeholders in South Asia to develop inclusive Gender Sensitive Media Guidelines. The guidelines have been validated in seven out of the nine countries through national consultations. Following the development of the guidelines, baseline surveys are being undertaken to assess the status of gender and media in the region, therefore, providing a basis for monitoring and evaluation.

Thanks to the generous support of the Government of Netherlands through the International Programme for the Development of Communication (IPDC), funds have been secured for conducting primary researches in four out of the nine countries in South Asia earmarked for the surveys.

In consultations with member states, UNESCO and SWAN are advocating for a holistic system for continuous monitoring and reporting on the status of gender-sensitive practices in the media in South Asia. The monitoring and reporting will include biennial regional status reports for South Asia, followed up with appropriate ameliorating interventions in collaboration with UNESCO member states and media stakeholders.

Media stakeholders are also being engaged in the strengthening of SWAN as a regional platform for promoting gender and media. The strengthening of SWAN will also involve institutional capacity development activities of its media partners in coordinating the application of UNESCO Gender Sensitive Indicators for Media (GSIM) and enhancing the safety of women journalists in South Asia.

The impact of the project is well summarised by Dr. Mariyam Shakeela, the Former Minister of Health and Gender of Maldives and a member of SWAN.

“The actions emanating from the UNESCO and SWAN project are paving way for a Gender and Media Protocol and its associated media barometer. With the two in place we will have the best mechanisms in South Asia to ensure a gender responsive media,” she said.

For more information about this project, please contact a.yusuph@unesco.org