UNESCO and the ORAPI Hygiene Foundation: Partners in Ebola recovery 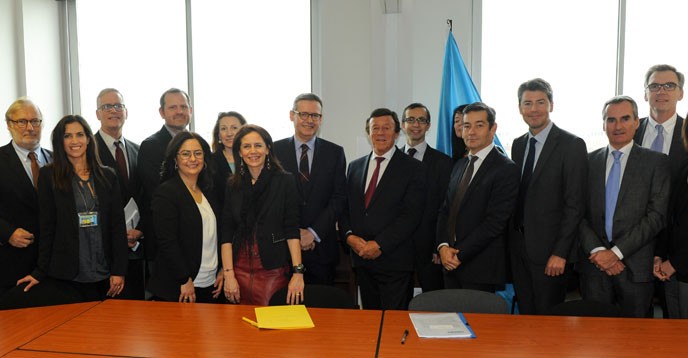 The current outbreak of the Ebola virus disease has had a devastating effect on communities in West Africa. Its impact has affected every part of society, impeding the delivery of basic services, such as health and education.

UNESCO’s response to Ebola is to strengthen the capacity of governments to recover from the outbreak and prevent future public health emergencies.

In this context UNESCO and the ORAPI Hygiene Foundation have signed a partnership for Ebola recovery and health promotion in Liberia. The signing took place on 2 December, 2015, at UNESCO Headquarters in Paris. The event launched a three-year partnership aimed at providing teachers, learners, and community members with the knowledge and skills for healthy practices. This project underscores the fact that students need to learn to be healthy; but they also need to be healthy to learn.

The ORAPI Hygiene Foundation was started by the ORAPI Group’s Chief Executive Officer, Guy Chifflot. The ORAPI Group is a French family firm leading in professional hygiene and industrial maintenance. The foundation seeks to build on this expertise to promote public health in France and other countries starting with Liberia. The foundation turned to UNESCO for guidance on how to contribute to the Ebola response.

UNESCO, working in line with the Liberian Government’s Economic Stabilization and Recovery Plan (ESRP), has developed a three-year project that will utilise ORAPI support to reach more than 300 schools with health and education resource materials and provide training for teachers, education officers and parent-teacher associations. It also involves the broadcast of health education messages with an Ebola prevention focus. The project will be implemented by UNESCO; the National Teacher’s Association of Liberia (NTAL); the Ministry of Education, Republic of Liberia; and in consultation with other implementing partners such as UN agencies and civil society.

WHO reports that while the Ebola virus seems almost eradicated in Liberia, the proximity with potential epidemic sources and countries still affected could be a threat. The needs of the education sector are acute in the wake of the Ebola outbreak. UNESCO will continue to work to find ways of supporting Liberia in its recovery and development. This project represents one way that UNESCO and the private sector can partner to save many lives from future Ebola outbreaks and other infectious diseases.