UNESCO and the Joint Institute for Nuclear Research (JINR) celebrated 20 years of successful collaboration with a debate on current challenges in the basic sciences. The meeting was also an opportunity to explore areas for future partnership.

UNESCO and JINR first signed an agreement in 1997, and have since been valued partners, collaborating in a variety of ways to strengthen capacity building in research. Joint activities include training programmes and grant mechanisms for researchers in the basic science. The two institutions have also joined forces in the framework of thematic International Years, spearheaded by UNESCO, which served to raise awareness of the importance of science as a driver of sustainable development, and to increase international scientific cooperation and knowledge sharing in key scientific fields, in order to the 2030 Agenda and the achievement of its Sustainable Development Goals.

In celebration of this long-lasting partnership’s anniversary, UNESCO and JINR organized a roundtable on the Challenges in the Basic Sciences on 14 February 2018 at UNESCO headquarters in Paris. The event was held in the same spirit of collaboration and belief that knowledge must be shared across borders and cultures, that science should never be divided in terms of geography, ethnicity or religion.

Eminent scientists participated in the discussion, including Dr Grigory Trubnikov, Chairman of the Committee of Plenipotenitiaries of JINR Member States and Deputy Minister, RF Ministry for Science and Education; Professor Yuri Oganissian, Leader of JINR’s Laboratory of Nuclear Reactions and after whom element 118 – oganesson – is named; Professor Mikhail Itkis, Vice Director of JINR and Professor Natalia Tarasova, former President of IUPAC. The event was led by Douglas Nakashima, Director of UNESCO’s Division of Science Policy and Capacity-Building and moderated by Martiale Zebaze Kana, Chief of UNESCO’s Section for Innovation and Capacity Building in Science and Engineering. 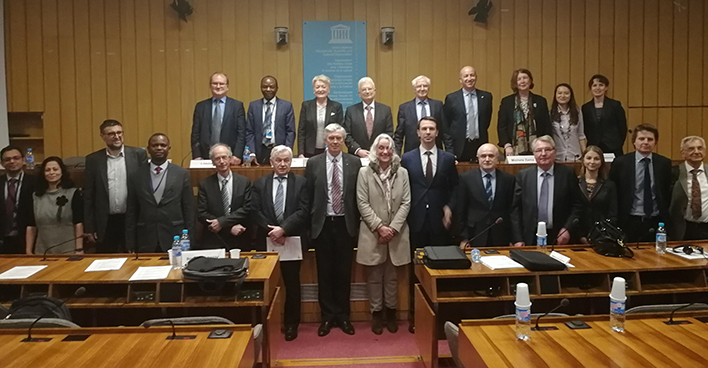 Much of the debate was focused on the current challenges to the basic sciences in supporting the achievement of the 2030 Agenda for Sustainable Development. The celebration of the International Year of the Periodic Table of Chemical Elements*, which will be celebrated in 2019, was discussed as a means to highlight the central role played by chemistry in major discoveries that underpin scientific progress, and provide solutions to current sustainable development challenges. This was the first of many stimulating events that will be organized by UNESCO in celebration of the Year.