UNESCO and 13onze15 invite media, advocacy and victims to talk about terrorism coverage 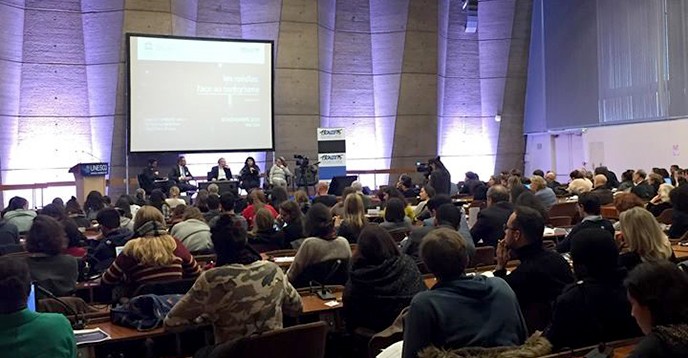 UNESCO and 13onze15, the association of the victims of the attacks of 13 November 2015, organized a conference at UNESCO Headquarters in Paris entitled "Terrorism and the media". In order to better understand the ethical dilemmas governing the journalistic treatment of terrorism, journalists, researchers and representatives of victims' associations shared their experiences and shed light on the issue.

"Terrorism threatens our most basic rights. It aims to generate a climate of anxiety that can lead citizens to reject the collective responsibility of an attack on a specific community, and decision makers to ask for the adoption of coercive measures. Yet a democracy deprived of the rule of law, deprived of freedom of expression, is no longer fully a democracy. Protecting freedoms of citizens and the media - freedom to thought, information and expression - and safeguarding our right to free and responsible information as we protect an 'intangible heritage of human rights', it is both undermining the ambitions of terrorists and countering their extremist and violent ideas, "said Moez Chakchouk, UNESCO’s Assistant Director-General for Communication and Information.

The event, attended by nearly 400 people, including journalists, students, victims and researchers, aimed to discuss the latest trends, issues and professional standards in reporting on terrorism and online violent extremism in print and electronic media. "We journalists are committed to critical thinking. The main quality that distinguishes between rumor and information, is checking an idea and multiplying sources ", insisted Mayssa Awad, senior reporter at France 24.

Experts stressed that these questionings were made in a context in which the flow of information is circular. "Violent extremist groups produce, and this is a new phenomenon, videos made with reports from news agencies, news broadcasts. Thereafter, communicators from these groups use all the images and comments made by the journalists of our media to justify their actions and to make propaganda ".

These recommendations on the effects of media coverage of terrorism were reminiscent of the fact that the media are also targeted by terrorism. "Talking about freedom of the press is inevitably talking about the attack of January 8, 2015 against Charlie Hebdo. Yes, this is a situation that illustrates the media in the face of terrorism. Not in the sense that we are using here but in the first sense, where a media is confronted with terrorism because it is its direct target, "said Philippe Duperron, President of the association 13onze15.

This conference was part of a global reflection initiated by UNESCO on the media coverage of terrorism. "We have published the handbook "Terrorism and the media" which is available in French, English, Arabic, and in three other languages. This guide has already been used in about twenty conferences all over the world. It has been converted into training modules that will be tested in December at a regional workshop in the Sahel. As you can see, the request to UNESCO for capacity-reinforcement in this area is growing, pressing, and I would add, universal. It comes from partners around the world: from Africa, Asia, the Arab-Muslim world, Europe and America ... We will make sure that these initiatives are only the starting point of a bigger and more holistic programme. In addition, we need partners and resources, also financial, around this primordial purpose. Because freedom of information must not be questioned by terrorism. Because freedom of information is a right, too, which must be used with professionalism ", said Moez Chakchouk, UNESCO Assistant Director-General for Communication and Information.

Fostering Freedom of Expression, Media in Crisis and Disaster Situations, Media Pluralism and Diversity, Terrorism and the Media