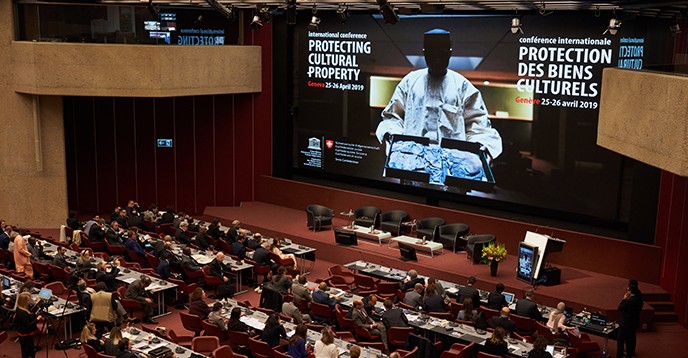 During the high-level conference “Protecting Cultural Property, International Conference on the 20th anniversary of the  1999 Second Protocol the 1954 Hague Convention,” representatives of Iraq, Lebanon and Somalia announced their intention to ratify the Second Protocol to the Hague Convention on the Protection of Cultural Property in the Event of Armed Conflict, thus joining the protocol’s current 82 States Parties.

This Conference was a major international event organized by UNESCO, with the support of the Government of Switzerland, in Geneva (Switzerland), from 25 and 26 April 2019. More than 270 participants engaged in the deliberations surrounding the successes, challenges and future of the 1999 Second Protocol, with over 60 States, 40 international governmental and non-governmental organizations and 20 academic institutions represented.

“Cultural heritage speaks to the souls of people, it is an expression of their identity. It is often deliberately targeted, to intimidate and annihilate the social fabric of a community,” said Pascale Baeriswyl, in her opening statement. “Such acts cannot go unpunished, and we must preserve what still can be preserved.”

Michael Møller stressed that “the enduring importance of the Hague Convention and the Second Protocol can be seen in cases such as Bamiyan (Afghanistan), Timbuktu (Mali), and Palmyra (Syria). Culture is never only about stones, but about human identity.”

Ms Karima Bennoune, United Nations Special Rapporteur in the field of cultural rights, encouraged more States to become a party to the Second Protocol in her video message.  She noted the need for protection of and access to cultural heritage is part of cultural rights, recalling that “enhanced protection” for cultural property is of the greatest importance for humanity, and that serious violations against cultural property trigger sanctions that are delineated in the Second Protocol.

The debates focused on issues such as the human rights approach to the protection of cultural heritage, the roles of non-governmental actors in safeguarding heritage, as well as emergency response mechanisms in modern armed conflicts. At the end of the Conference, the Government of Switzerland highlighted key recommendations, which include adoption of  robust national legislation, defining a transversal strategy and a capacity-building strategy to benefit States, as well as encouraging cooperation between stakeholders at the national and international levels. The proceedings of the Conference will be made public in June 2019.

Crisis Preparedness and Response , Protecting Our Heritage and Fostering Creativity, Culture in Emergencies