On 17 September 2021, UNESCO launched a supplementary online survey destined to civil society to collect new data on the world’s languages. All specialized organizations, grass-root associations, and centres active in the domain of languages and representatives of language communities are invited to share data on their languages.

This data collection effort is aimed at feeding the new platform of the UNESCO World Atlas of Languages. UNESCO developed a comprehensive methodology for the assessment of linguistic diversity status around the world as a part of the Organization’s commitment and contribution to the promotion of linguistic diversity and multilingualism. Thanks to the inputs of UNESCO’s Member States, researchers, experts and other stakeholders to the Global Survey of Languages, launched in 2018 by the UNESCO Institute for Statistics, the development of the WAL is now entering its final phase, and will be launched at the 41st General Conference of UNESCO in November 2021.

The primary objective of the World Atlas of Languages is to document, value and support more than 8,000 languages in use (spoken and signed) in the world. It also aims to generate renewed interest for more coordinated global actions towards the preservation, revitalization and promotion of languages within the context of the upcoming International Decade of Indigenous Languages (IDIL2022-2032), for which UNESCO will act as lead UN agency.

The World Atlas of Languages online survey is available in English, French, Russian and Spanish. The survey covers a variety of aspects related to language use and users in different domains of life. All interested community organizations are encouraged to submit accurate and reliable data on their languages by 1 October 2021.

Your valuable contribution will help us to learn more about your language and the challenges affecting its vitality, as well as contribute to policy making and the development of new solutions to support the world’s languages online and offline. Preserving, revitalizing, and promoting linguistic diversity around the world is at heart of UNESCO’s mission, with the broader perspective of promoting sustainable development, peacebuilding and reconciliation in our societies. 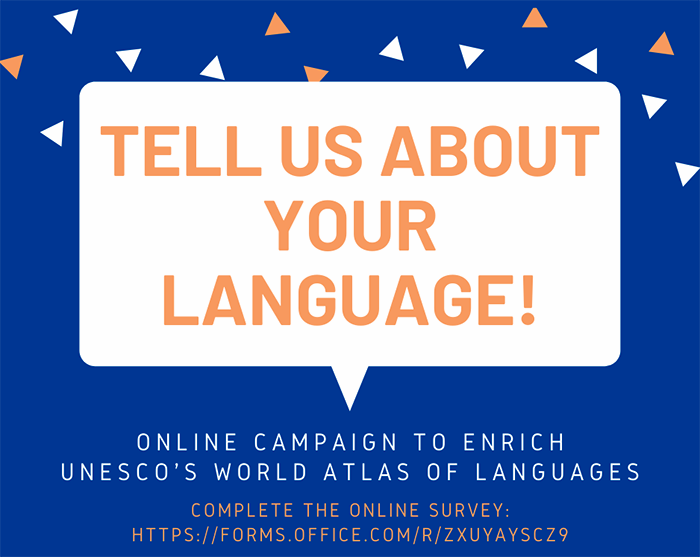