Stop attacking the media—UNESCO message for International Day to End Impunity for Crimes Against Journalists, 2 November 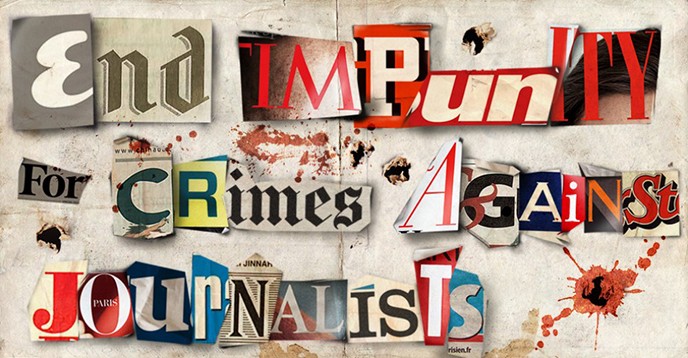 Ninety percent of cases concerning the killing of journalists remain unpunished, according to information Member States provided to the Organization in 2017. This is a slight improvement compared to last year, when countries’ answers to UNESCO’s written enquires indicated that only 8% of such cases led to a conviction.

“Justice is a cornerstone of a free society. It dissuades those who threaten freedom of expression and emboldens those who stand to defend it,” said Director-General of UNESCO, Irina Bokova. “This is why injustice against journalists is so costly for all societies.”

Between 2006 and 2016, UNESCO condemned the killing of 930 journalists. Of these, 102 journalists were killed in 2016 alone, according to UNESCO’s latest figures, which appear in the forthcoming World Trends in Freedom of Expression and Media Development: Global Report 2017/2018.*

The majority of journalists killed in 2016 (94%) were local journalists, reporting local stories. Half of the killings (50%) occurred in countries where there was no armed conflict, compared to 47% in 2015.

The proportion of female journalists killed rose from 5% in 2006 to 10% in 2016. Women also continue to face specific threats, including online harassment.

This improvement shows growing willingness on the part of countries to share information on the subject. It is, however, woefully insufficient to achieve the objectives of the International Day to End Impunity for Crimes against Journalists (IDEI), observed annually on 2 November.

“The news is filled with reports of our colleagues, journalists getting killed, wounded, imprisoned all over the world,” said UNESCO Goodwill Ambassador for Freedom of Expression and Journalist Safety, Christiane Amanpour. “We, the press, must continue to fight for an end to impunity.”

On the occasion of the Day, on 2 November UNESCO and its partners will launch a global campaign in association with media from all over the world and a social media campaign #MyFightAgainstImpunity.**

On 4 December, UNESCO will hold a one-day seminar to commemorate the Day in Colombo, Sri Lanka, entitled “Reinforcing regional cooperation to promote freedom of expression and the rule of law in Asia through ending impunity for crimes against journalists”.

The event will seek to advance dialogue and define strategies to strengthen regional cooperation on the safety of journalists and ending impunity in Asia. Organized by UNESCO and the Sri Lankan Ministry of Finance and Mass Media, the event will feature the participation of regional stakeholders, including representatives of national human rights commissions.

Regional and local events for the International Day to End Impunity for Crimes Against Journalists will be organized worldwide, including in Italy, Kenya, the Philippines, Senegal, Tunisia, the United States of America and many other countries.

In 2013, the United Nations General Assembly adopted Resolution A/RES/68/163, which proclaimed 2 November as the International Day to End Impunity for Crimes against Journalists. The Resolution urged Member States to implement definite measures countering the present culture of impunity. The date was chosen in commemoration of the assassination of two French journalists, Ghislaine Dupont and Claude Verlon, in Mali on 2 November 2013.

Follow the International Day with the hashtags #EndImpunity and #JournoSafe.

* Illustrations of the key findings related to the safety of journalists from the forthcoming World Trends in Freedom of Expression and Media Development Report: 2017/2018 Global Report are available at https://en.unesco.org/world-media-trends-2017 . The report is supported by the Government of Sweden.

**More information about, and a media kit for, International Day to End Impunity for Crimes Against Journalists is available on en.unesco.org/endimpunity-2017. The media kit is available through this link

Crisis Preparedness and Response , Fostering Freedom of Expression, Press Freedom on All Platforms, Safety of Journalists