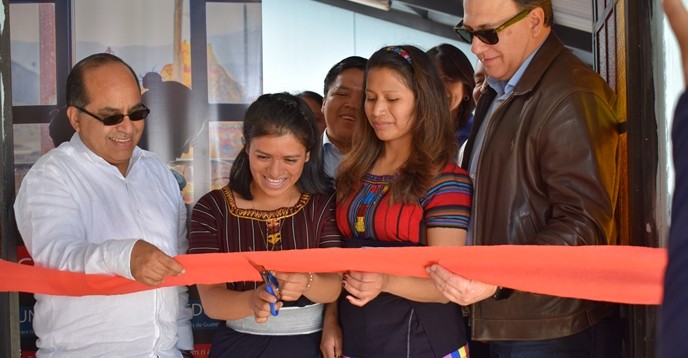 In Guatemala, many young women stop studying due to their pregnancy. According to the 2014-2015 Encuesta Nacional de Salud Materno Infantil (National Survey of Maternal and Child Health), about half of women aged 20-49 were married before the age of 20, and 43% were mothers before that age as well. Yet access to education for women means access to the necessary skills for active participation, economic autonomy and empowerment within a community.

To increase young women’s, and in particular indigenous women’s, access to education UNESCO has opened two UNESCO Malala Centres in the municipalities of Santa Maria Chiquimula and San Andrés Xecul in Totonicapán, Guatemala, through the UNESCO Malala Fund for Girls’ Right to Education. The Centres provide girls, adolescents and women from each community the support needed to access the education they seek.

Over 1,000 people across the communities attended the official inauguration of both centres in July 2018. The events brought together national and local authorities, including the Minister of Education, the Director of the UNESCO Office in Guatemala and the mayor of San Andrés Xecul, as well as young women from the community. Participants showed their appreciation of the joint work by the UNESCO Guatemala Office and the Ministry of Education to strengthen women’s access to education.

During the event in Santa Maria Chiquimula, the Minister of Education, Oscar Hugo López Rivas highlighted the important barriers that indigenous women face to stay in school and finish their education, and invited the children who were present at the event to encourage their mothers to continue and finish their education. “I’m the son of a woman that had her first child at 15 years old” he began. “I’m her first son, and she didn’t get to finish primary school…but when she was 55 years old she finished it. We [her children] motivated her to finish school.”

In San Andrés Xecul, Mayor Rolando Xum emphasized the important role of women’s education in community development, and shared that he had the opportunity to complete his studies thanks to the programmes offered by the Guatemalan Institute of Radio Education, a key partner of the UNESCO Guatemala Office. He encouraged the Ministry of Education to continue working towards gender equality in education and promote projects that close the gender gap in access to education. "Education is a fundamental condition for a person to be able to understand society, and defend their own rights", said Dr. Carranza, Director of the UNESCO Office in Guatemala.

When asked about continuing their education, many women were left speechless; “I didn’t think it was an option” was a common answer among them. The Centres have made the existing non-formal education programs accessible for women, providing the information needed to pursue an education tailored to their needs. The opening of the UNESCO Malala Centres has created a surge of hope for women to continue their education.

From 15 October to 18 December 2018, UNESCO is running a digital campaign on the #RightToEducation to mark the 70th year of the Universal Declaration of Human Rights. Join here.