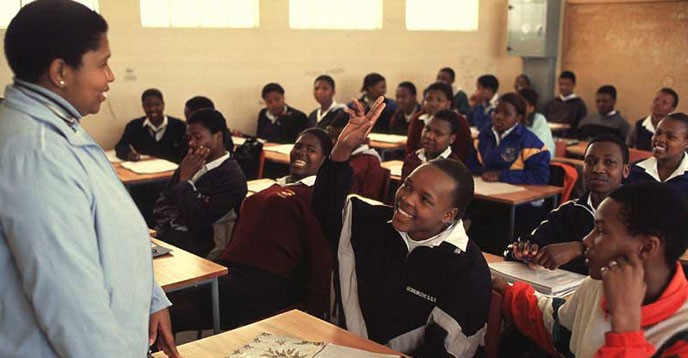 Educationalist Professor Veronica McKay who will make a keynote presentation at UNESCO HQ for International Literacy Day likes to work on a large-scale.

The Acting Executive Dean of Education at Unisa (the University of South Africa in Pretoria) was the engine behind the KhaRiGude (Learn With Us) South African Literacy Campaign which, between 2007 and 2011, enabled four million adults to become literate, 80 per cent of them women.

She went on to coordinate the South African Government’s Department of Basic Education school workbook development project which since 2011 has distributed 158 million books to schools.

“Literacy is linked to all development goals,” said Professor McKay. “It is the glue between all development components including health, agriculture and economic activity.”

Despite the mass scale of the South African programmes Prof. McKay has witnessed the profound and lasting changes literacy can bring about on a human scale. As part of the programme, students, mostly women, were surveyed on the change literacy had made to their lives.

“Many said ‘I feel more confident, I am more respected in my community,’” said Prof. McKay. “For example, some elderly women were able to use a cash machine for the first time. Previously they had to send someone on their behalf. They were often surprised to discover the real amount of their pension for the first time.”

Others launched micro businesses selling food or beadwork or were better skilled to find work in agriculture or roadmaking. Some were empowered to attend school meetings and had greater access to health and in particular HIV programmes.

One of the effects of HIV and AIDS and migrant work in South Africa is that grandmothers experience a second round of ‘motherhood’ taking care of grandchildren but, because society has moved on, they need to be literate to draw cash, access health information, follow schooling.

The workbook project which developed books in 10 African languages and English has brought school and home closer together. Before the workbooks teachers would photocopy whatever textbook was available and teach from the board.  The workbooks are also designed to challenge gender and racial stereotypes positively portraying girls in active roles and participating in the world of work.

“A family whose only book in the house previously might have been the bible now has a growing library of full colour beautifully illustrated books in mother languages offering one lesson a day for leaners that is used intergenerationally,” said Professor McKay.

Having books around has demystified the curriculum and made parents aware that there are exercises their children must complete. It has helped teachers too by giving them a lesson structure where many may not have been fully trained to teach literacy.

The workbooks include a special exercise for the 8 September where children are invited to design their own poster to celebrate International Literacy Day.