Members of the Somalia National Committee of Safety of Journalists have called upon the Federal Government of Somalia to appoint a special prosecutor for crimes against journalists as a solution to the high levels of impunity in the country.

The call was one of the many resolutions endorsed by the Committee after a two-day workshop, which took place on 15-16 September 2019, in Mogadishu, Somalia. The workshop, which was organized by the Federal Ministry of Information, Culture and Tourism, with the support of UNESCO, aimed at devising strategies to address Somalia’s increasingly dangerous environment for journalists.

According to the 2018 UNESCO Director General’s Report on the Safety of Journalists and the Danger of Impunity, over the last three years, Somalia has consistently recorded the highest number of journalists killed in Africa, accounting for half of all the journalists killed in the continent.  Yet, despite the high levels of fatalities, only 11% of the cases have been judicially resolved.

National efforts to address the problem of safety of journalists and the issue of impunity were given a boost in April 2018 when media, government and civil society stakeholders convened in Somalia to establish a National Mechanism for Safety of Journalists. The Mechanism appointed a multi-stakeholder National Coordination Committee to coordinate and harmonize all initiatives related to the safety of journalists in Somalia, ensure the government’s response to affronts on journalists, and support the government in complying with its national, regional and international reporting obligations.

Among other resolutions from the workshop, participants requested the Somali Ministry of Justice to ratify the Protocol on the establishment of the African Court on Human and Peoples Rights, and make a declaration allowing Somali citizens and NGOs direct access to the Court. This recommendation is based on the benefits of ratifying this protocol, particularly the domestication of the landmark judgements on safety of journalists and criminal defamation made by the African Court. 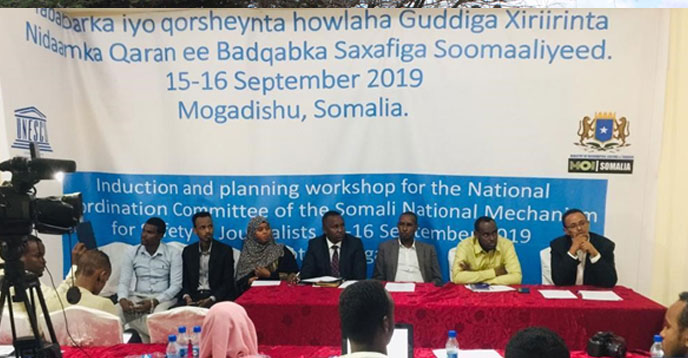 Participants at the Mogadishu induction workshop on safety of journalists. Photo: Min of Information, Somalia

The participants also appealed to the Federal Government of Somalia to enact the access to information law, which established a public service broadcaster and is supporting the implementation of the revised media law in order to provide a legal and policy framework that supports freedom of expression, access to information and safety of journalists in Somalia.

At the workshop’s opening, the Deputy Minister of Information, Culture and Tourism of the Federal Government of Somalia, Adan Isak Ali assured the government’s support to initiatives to protect journalists and fight impunity. “The safety of Somali journalists is a responsibility for all the stakeholders, particularly for the Ministry of Information, Culture and Tourism. We are committed to supporting the National Coordination Committee for safety of journalists, ensure punishment for crimes against media workers and put an end to impunity. It is important that we are in line with the international policies and mechanisms, and are implementing the SDG 16.10.1.", he said.

This project is supported by UNESCO’s Multi-Donor Programme on Freedom of Expression and the Safety of Journalists.