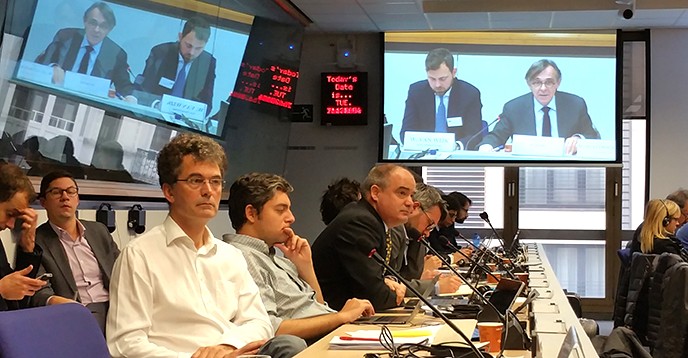 As the European Commission engages on a broad-based consultation about how to deal with disinformation online, UNESCO’s Guy Berger, Director, Freedom of Expression and Media Development, has advised the institution to avoid the phrase “fake news”.

The UNESCO director was speaking on Tuesday at a Multi-Stakeholder Conference on Fake News, 13-14 November 2017, convened in Brussels, Belgium, by the European Commission: Directorate-General for Communications Networks, Content and Technology.

He also called on news institutions to improve their related professional standards in order to provide credible alternatives to disinformation. “This is why UNESCO works with the European Union to support press councils to transition to the digital age,” he elaborated.

The risk of using the phrase “fake news” was to undermine all news, said Berger. He noted that  Frank la Rue, the Assistant Director General (ADG) for Communication and Information at UNESCO, analysed “fake news” as a contradiction in terms.

“If it is news, then it isn’t fake; and if it is false, then it can’t be news,” Berger said, summarising the ADG’s view.

Combining the two words only served to sow seeds of cynicism and relativism, and to throw individuals into reliance on gut-feel and personal networks for their assessment of what is credible.

In his remarks, Berger also signalled the need to give attention to the narrative frameworks which give meaning to information, as these pointed to responses that went beyond the fact-checking and debunking of “imposter news”.

“News works within a narrative structure that supplies a context and a cloak of connections and significance – along with connotations of veracity, authenticity, and authority.”

He explained that news literacy empowered users to understand news as narrative in this sense, adding that this insight was a condition to be able to identify fraudulent news within the same system.

“More broadly, users – especially young people who are forming their identities - need the skills to understand how all narratives – including news, entertainment and propaganda - presume identities.

“Linked to this is the importance of understanding that participation in narratives (whether receiving, producing, and sharing) is performative. It cultivates our sense of belonging and whom we are.”

Berger said that the composite concept of media and Information literacy (MIL) could help to educate users about what were being called the new apps of “persuasion and addiction architectures”.

MIL could also prepare users for future digital creations that concealed manipulation in video and voice recordings, and for the abuse of Artificial Intelligence to perfectly customise bogus news to resonate with each targeted individual.

He urged Internet intermediaries to reconsider the way they served each individual with his/her own customised news feed and search results. “Instead of blindly following the market of prior individual preference, could they not also make money by leading the market - and including diversity in the news and views supplied within each individualised service?” he asked.

We cannot have real public access to information without Internet companies recognizing the value of supplying inclusive narratives, instead of them continuing to create individualized bubbles based on algorithms that privilege narcissism, said Berger

The combination of comprehensive MIL so as to educate users to see the power of narrative; of reinforced self-regulation among the genuine providers of news; and of changes in Internet business models, could all be elements of a holistic solution, he concluded.