Small Islands Developing States (SIDS) are at the forefront of climate change and its consequences, particularly with regard to their freshwater resources. 71% of SIDS face a risk of water shortage, a figure that goes up to 91% in SIDS with the lowest altitude. These challenges were the focus of a high level meeting organized by UNESCO, in cooperation with the Governments of Saint-Kitts-and-Nevis, the Seychelles and the Principe Island Autonomous Region during the 74th UN General Assembly in New York.

Surrounded by the ocean, their groundwater is prone to saline intrusion: 73% of SIDS face a risk of groundwater pollution*. It is a major challenge for countries that are vulnerable to phenomena such as tsunamis, hurricanes, floods or drought. A trans-sectoral and interdisciplinary approach is necessary to ensure water security in SIDS.

The high level meeting, held on 27 September 2019 in the framework of the High Level Mid-Term Review of the Samoa Guidelines, focused on the specific needs and challenges of SIDS regarding water quality, wetland conservation and water availability. Freshwater resilience and knowledge systems in SIDS were at the heart of the discussions, as "it is essential to implement integrated and continuous water management to ensure the sustainability of inland freshwater resources and marine resources" said UNESCO Assistant Director-General for Natural Sciences, Shamila Nair-Bedouelle, stressing the importance of having integrated water management directly in the islands. 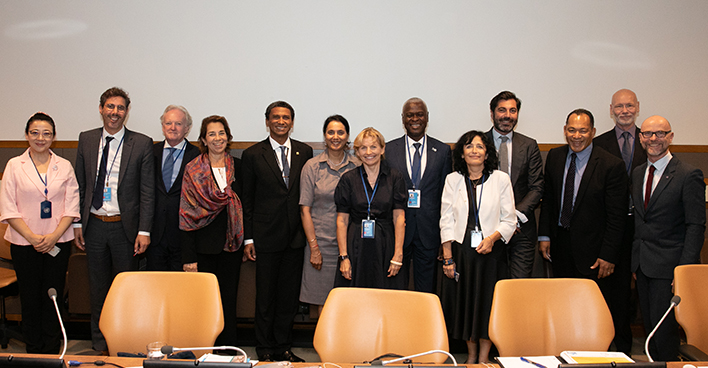 UNESCO has been supporting SIDS for more than 30 years and continues to be a prime partner, particularly through the SIDS Action Plan, adopted in 2016 by the Organization to directly support the implementation of the SAMOA Pathway. In the same year 2016, for example, 42 SIDS benefited from a specific assessment of their groundwater to improve their governance at the local and national levels, under the TWAP project of UNESCO's International Hydrological Programme.

Danny Faure, President of the Republic of Seychelles, thanked UNESCO for its Action Plan and cooperation and said “the Seychelles calls upon UNESCO to continue its commitment towards SIDS”

Video of the full session:

Video on meeting the challenges of freshwater in SIDS:

Video: highlights of the High Level Mid-Term Review of the Samoa Guidelines