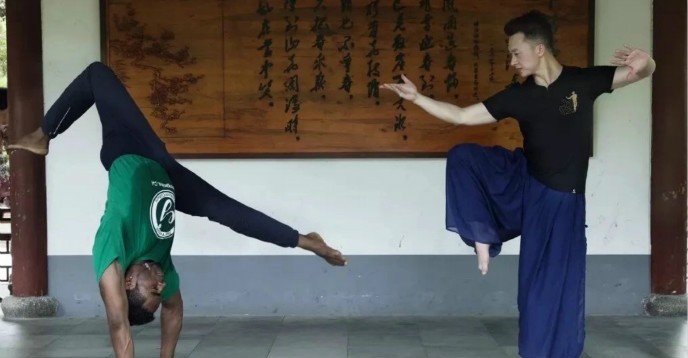 The short film “Capoeira meets Chinese Martial Arts” officially released during the reception to celebrate the Brazilian National Day on September 17th. This 10-minute documentary, coproduced by the Embassy of Brazil and Flow Creative Content, in partnership with United Nations Educational, Scientific and Cultural Organization (UNESCO) and Tencent, shows the meeting of Brazilian Capoeira masters with Chinese Martial Arts masters in Beijing and Hangzhou. By exploring the differences and similarities between their arts, these masters discuss on how traditional cultures can thrive in modern society and still help relate to others and understand ourselves.

The release took place in the context of “Creation of an Open Digital Library on Traditional Games (ODLTG)”, a global project launched in 2015 by UNESCO with the financial and technical support of Tencent. Building upon UNESCO’s activities in promoting inclusive knowledge societies, creating an International Network on Traditional Sports and Games, and safeguarding and promoting intangible cultural heritage, amongst else, the project utilizes Information and Communication Technologies (ICTs) to preserve and promote traditional and unique sports and games, in order to safeguard this living heritage and pass it down to future generations.

During the past four years, the project was carried out in six countries from four continents. Among the pilot countries is Brazil - rich in traditions and cultural heritage, including traditional games and sports. In 2016, the project team went on a research visit to collect data and audio-visual materials, including valuable interviews with professional players and the communities, who are practitioners, trainers, and guardians of the knowledge of traditional Brazilian games. As one of the most representative and unique traditional games of Brazil, Capoeira was also documented for the digital library, so that people from all over the world can learn about the game and learn how to practice it.

The value of the Open Digital Library on Traditional Games goes beyond the preservation aspect. It lies in the promotion of indigenous, traditional local knowledge for learning, development, and the Rapprochement of Cultures. This video is a perfect showcase of such endeavor. The initiative will certainly contribute to deepening the cultural and people-to-people exchange between China and Brazil.