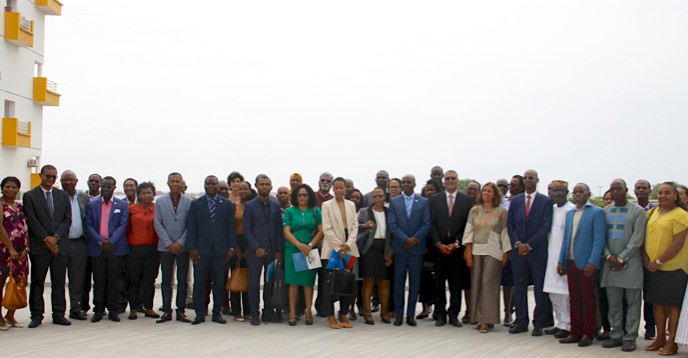 The Seventh IHP Africa Regional Steering Committee Meeting was held in Praia, Cabo Verde from 1 to 3 October 2019. Among many outputs, a major outcome of the meeting was the adoption of the ‘Praia Statement’ which outlines the agreements and recommendations for future actions of IHP in Africa.

The International Hydrological Programme (IHP) created in 1975 has been instrumental in contributing to improved knowledge on water resources in Sub-Saharan Africa. IHP is the only intergovernmental programme of the UN System devoted to water research, water resources management, and education and capacity building. As an evolving Programme built to respond to the needs of Members States, IHP established various water-related scientific networks in Sub-Saharan Africa, including Flow Regime from Experimental and Network Data (FRIEND) in West and Central Africa (AOC), in Southern Africa (FRIEND-SA) and FRIEND-Nile, the Internationally Shared Aquifer Resources Management (ISARM) West Africa, ISARM in Southern African Development Community (SADC), the Intergovernmental Authority on Development (ISARM-IGAD) and ISARM central Africa, the Global Network on Water and Development Information for Arid Lands (G-WADI) Sub-Saharan Africa and the network of Hydrology for the Environment, Life and Policy (HELP) basins.

Through IHP, chairs and regional centres have also been established. These scientific networks, chairs, regional centres and the national IHP committees constitute the IHP Africa water family. Every two years, a regional meeting of IHP Africa is organized for IHP National Committees in Africa to discuss and share the progresses achieved by countries in addressing Africa water challenges. The sixth IHP Africa meeting was organized during July 2017 at Port Elizabeth, South Africa in partnership with the Government of South Africa.

This year, the Seventh IHP Africa Regional Steering Committee Meeting was organized in Praia, Cabo Verde, from 1-3 October jointly with Agencia Nacional de Agua e Saneamento (ANAS) and Cabo Verde National Commission for UNESCO to inter alia take stock of the implementation and governance of the IHP programme in Africa, share the achievements of the IHP in Africa, discuss development initiatives and how to strengthen the programme in Africa.

Opening Ceremony
At the opening were dignitaries including Ms. Deborah Mochothi (Chair, Africa IHP Committee); Mr. Hamet Baba Ly (President, UNESCO-IHP); Mr. Dimitri Sanga (Director, UNESCO Multisectoral Regional Office for West Africa Sahel); Ms. Ana Graca (Resident Coordinator, UN Systems in Cabo Verde;) and Mr. Gilberto Silva (Honourable Minister for Agriculture and Environment, Cabo Verde). All dignitaries present gave speeches aim at strengthening collaboration and increasing investments to tackle confronting challenges of water in Africa. The President of IHP recalled his election in June 2018 at the 23rd Intergovernmental Council (IGC) meeting of the IHP in Paris and admonished delegates to identify the key points in the 2020-2022 year of activities of IHP which marks the end of the 8th Phase, where Africa and gender are major focus. He also reminded delegates of the hosting rights offered Senegal for the 2021 World Water Forum, first of its kind in Africa, and the need to mobilize support of the people and governments of the region for this very important event. 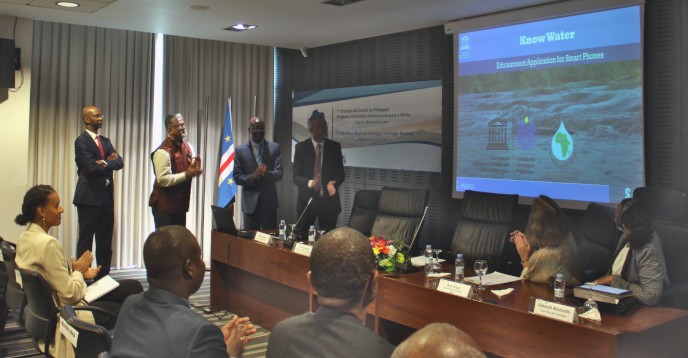 Launch of Mobile Applications
At the meeting, the Honourable Minister of Agriculture and Environment of Cabo Verde jointly with the UN Resident Coordinator of Cabo Verde and the Director of the UNESCO Multisectoral Regional Office for West Africa (Sahel) launched the two Mobile Apps (“Rainwater Harvesting” and “Know Water’) developed by the IHP in collaboration with other stakeholders to foster large-scale adoption of rainwater harvesting and improve knowledge on water use among high school students.

Appointment of a New Chair for the Africa IHP Committee
After the opening ceremony, a new chair to steer the affairs of the African IHP Committee in the next two years was appointed from the host country as is customary with the rules and regulations of the Committee. The appointed Chair is Mr. Antonio Pina of ANAS. In his inaugural address, the new chair thanked all delegates and ANAS for appointing him and promised to discharge his duties diligently.

Adoption of ‘Praia Statement’
Among many outputs, a major outcome of the meeting was the adoption of the ‘Praia Statement’ which outlines the agreements and recommendations for future actions of IHP in Africa.  It was agreed that the 8th IHP Africa Regional Steering Committee meeting will be held in Dakar before or during the World Water Forum in 2021.