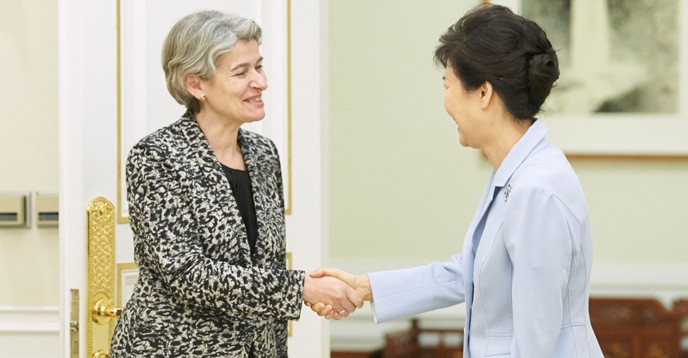 Education is not only transformative but fundamental for fighting violent extremism and promoting inter-cultural and inter-religious dialogue, affirmed President Park Geun-hye during a bilateral meeting with UNESCO Director-General Irina Bokova at the Blue House in Seoul on 20 May 2015.

The meeting took place in the context of the World Education Forum in Incheon, opened by the President on 19 September.  Hosted by the Government of the Republic of Korea and gathering over 1,200 participants, it is organized by UNESCO with six United Nations conveners.

“Korea is delighted to host a meeting that is setting the education vision for 2030. We must build on the efforts made to further expand quality education and lifelong opportunities and together work to make sure that this vision is faithfully incorporated into the post-2015 development agenda,” said President Park Geun-hye.

“The international community should assign higher priority to education,” she said.

Noting that this marks her fifth visit to the Republic of Korea, the Director-General expressed appreciation for the country’s solid support to the Organization’s activities, including through advocacy for the recognition of education and culture in the sustainable development goals.

Referring to the World Education Forum, the Director-General noted that it marked a “powerful testimony of the Republic of Korea giving back to the world, expressing strong solidarity, commitment and engagement with the world, including through supporting UNESCO activities in education, skills development for youth and culture. I am sure this Forum will have positive impact on countries, policies, UN and finally on sustainable development and peace.”

President Park Geun-hye said that she was inspired by UNESCO’s Constitution and its present-day relevance.

“The more fundamental answer to violent extremism as well as inter-religious and intercultural clashes lies with education,” she said.

“I recognize the importance of Global Citizenship Education and will work actively with UNESCO to spread it. We find very rewarding to give back to the international community and repay assistance given to us by contributing to activities in education and culture through cooperation in those areas.”

She also noted the Republic of Korea’s support as a champion country of the Global Education First Initiative, referring to the dissemination of good practices through the Asia-Pacific Center of Education for International Understanding, under the auspices of UNESCO, and as a contributor to the Global Partnership for Education.

The Minister of Foreign Affairs Mr Yun Byung-Se affirmed the Republic of Korea’s determination to play a role in implementing the sustainable development agenda, and expressed hope that the outcomes of the World Education Forum would be fully reflected at the United Nations Summit in September.

“Education is a key instrument to advance human dignity.  We are in a position to tell the international community that this is the right approach to pursue, the right direction,” he said, asserting that UNESCO was the “perfect partner” in this pursuit.

In the face of extremism and radicalization, he expressed firm backing for global citizenship education as a response to trends highlighted by the Director-General, including the destruction of cultural heritage, illicit trafficking of works of art and the persecution of minorities.

The Director-General emphasized UNESCO’s soft power contribution to fighting extremism, fostering mutual respect and building peace, and reiterated the importance of Korea’s contribution, calling also for increased support. Ms Na Geyong-won affirmed that, in the face of current events, Korea is prepared to play an even greater role in the international community, and should increase its development assistance budget.

The Director-General outlined the breadth of the Republic of Korea’s cooperation with UNESCO in her meeting with Speaker of the National Assembly Mr Jeong Ui-hwa, noting the key role of parliamentarians in setting policies, passing legislation and supporting UNESCO.

“Korea values the soft power of UNESCO and what it contributes to peace and stability,” said the Director-General. Mr Jeong said that Korea could be a centre of soft power, drawing attention to its unique cultural traditions and its investment in education. In response to his concern over rising inequalities, health pandemics and other global issues, the Director-General affirmed that multilateralism is the key framework for addressing these pressing issues.