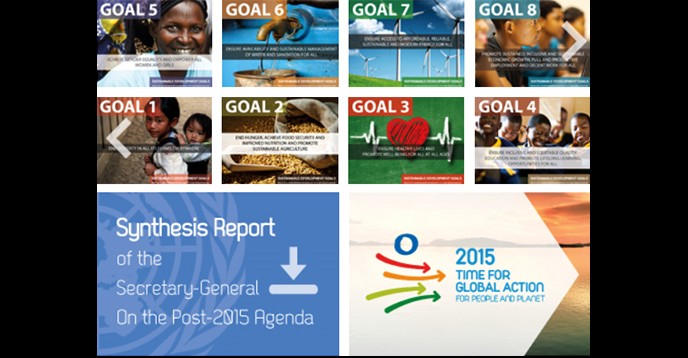 “Press freedom and access to information, freedom of expression, assembly and association are enablers of sustainable development.” This statement is included in the UN Secretary-General Ban Ki-Moon’s “synthesis” report on the UN’s post-2015 development agenda released last week.


Titled “The Road to Dignity by 2030: Ending Poverty, Transforming All Lives and Protecting the Planet”, the document states that “People across the world are looking to the United Nations to rise to the challenge with a truly transformative agenda that is both universal and adaptable to the conditions of each country, and that places people and planet at the center.”

It continues: “Their voices have underscored the need for democracy, rule of law, civic space and more effective governance and capable institutions; for new and innovative partnerships, including with responsible business and effective local authorities; and for a data revolution, rigorous accountability mechanisms, and renewed global partnerships.”

The report recognizes numerous contributions to the post-2015 development debate, indicating that amongst the points which these have underlined, they have also “called for strengthening effective, accountable, participatory and inclusive governance; for free expression, information, and association; for fair justice systems; and for peaceful societies and personal security for all.”

UNESCO has been prominent among these calls concerning free expression issues to be recognised with the development debate, notably in the World Press Freedom Day Paris Declaration and Bali Roadmap.  Both these documents asked UNESCO Director General Irina Bokova to share their contents with Secretary General Ki-Moon.

In acknowledging receipt of the statements earlier this year, the UN Secretary General communicated to UNESCO that freedom of expression, press freedom, independent media and the right of access to information were of high importance, and should not be lost sight of in the ongoing post-2015 deliberations.

Predating the release of the SG’s new report, UNESCO’s 29th session of the intergovernmental Council of the International Programme for the Development of Communication (IPDC)  agreed in November on a decision that expressed disappointment that there was “no specific reference to the right to freedom of expression and information and its corollary, media freedom.”

The Council was responding to the UN Open Working Group’s list of Sustainable Development Goals (SDGs) where number 16 is: “Promote peaceful and inclusive societies for sustainable development, provide access to justice for all and build effective, accountable and inclusive institutions at all levels.”  Goal 16.10 elaborates: “ensure public access to information and protect fundamental freedoms, in accordance with national legislation and international agreements.”

The IPDC Council urged Member States to ensure that freedom of expression, free, independent and pluralistic media, and media development are integrated into the universal Post-2015 Development Agenda. A report to the council elaborated the work of the secretariat in regard to the status of freedom of expression as both a means and an end in sustainable development.

The “Road to Dignity” report signals that the SDGs will finalized be at a special Summit on sustainable development in September 2015. It proposes the possibility to maintain the 17 goals put forward by the UN’s Open Working Group, and to “rearrange them in a focused and concise manner that enables the necessary global awareness and implementation at the country level”.

UNESCO member states at the 37th General Conference recommended, in Resolution 64(v), that “the importance of promoting freedom of expression and universal access to knowledge and its preservation - including, among others, through free, pluralistic and independent media, both offline and online – as indispensable elements for flourishing democracies and to foster citizen participation be reflected in the post-2015 development agenda”.

The call for freedom of expression to be at the heart of the SDGs was also made by UNESCO at the WSIS+10 event in Geneva during 2014, as well as at a large number of other events.

Besides UNESCO, many civil-societal groupings have been pushing for a clearer statement within the UN on the link between free expression, press freedom and sustainable development.

The GFMD coalition has endorsed UNESCO in taking leadership over coordinating the monitoring of any media-related indicators for the post-2015 agenda.