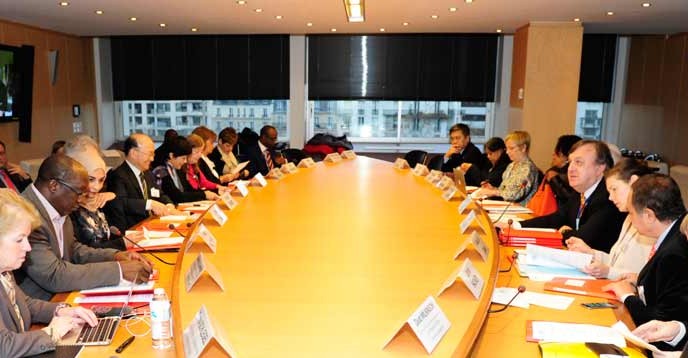 At the invitation of Ms Irina Bokova, Director-General of UNESCO and Chairperson of the Scientific Advisory Board of the UN Secretary-General (SAB), the second meeting of the SAB will take place at UNESCO’s Headquarters, on 10 and 11 December 2014.


The main objective of the meeting is to define the Board’s future programme of work in close linkage with the UN Secretary-General’s agenda and major 2015 UN events and processes, such as the final phase of the definition of the post-2015 development agenda, the High-Level Political Forum on Sustainable Development, and the Paris Climate Conference COP 21. The meeting aims also at assessing SAB’s activities and their impact since its inaugural meeting (30-31 January 2014, Berlin, Germany) and at identifing collaborative initiatives with other international and regional science-related bodies, e.g. the UN Sustainable Development Solutions Network, the Joint Research Centre of the European Commission, Future Earth and the Global Young Academy.

At the initiative of the Director-General of UNESCO, an information meeting with UNESCO’s Member States will be held with the participation of SAB members on 11 December, from 3 to 5 p.m. in room X. On this occasion, UNESCO’s Member States will be informed about the outcomes of the SAB’s meeting and will have the opportunity to engage directly in a discussion with the SAB members.

Prior to the SAB meeting, on 9 December, at the inivitation of H.E. Mohamed Sameh Amr, Chairperson of the Executive Board of UNESCO, four members of the SAB, namely Prof. Carlos A. Nobre, Brazil’s National Secretary for Research and Development Policies ; Prof. Jörg Hacker (Germany), President, German National Academy of Sciences – Leopoldina; Prof. Reiko Kuroda (Japan), Professor, Research Institute for Science and Technology, Tokyo University of Science, and; Prof.  Wole Soboyejo (Nigeria), President, African University of Science and Technology (AUST),  will participate in two information meetings with members of the UNESCO’s Executive Board on ‘Science for Sustainable Development’ and on ‘Climate Change and Sustainable Development’.

The SAB was launched by the UN Secretary-General on 30 January 2014, in Berlin, Germany. It is composed of 26 eminent scientists representing all regions and many scientific disciplines relevant for sustainable development spanning from natural sciences and engineering to social and human sciences. The central function of the Board is to provide advice on science, technology and innovation (STI) for sustainable development to the UN Secretary-General and to Executive Heads of UN organizations. Among its many functions, the Board shall contribute to the strengthening the linkage between science and policy and ensuring that up-to-date and rigorous science is appropriately reflected in high-level policy discussions within the UN system;

At the request of the UN Secretary-General, the Secretariat of the Board is hosted by UNESCO and the Director-General Irina Bokova serves as its Chairperson.

Since its creation in January 2014, the  SAB’s achieved several important results including: (a) advice provided to the UN Secretary-General and to the Open Working Group of Member States on the SDGs, and key messages formulated on the crucial role of science, technology and innovation (STI) for sustainable development in general, and for the definition of the SDGs and related targets, in particular; (b) awareness raised on the key importance of a strengthened interface between science and policy in addressing climate change challenges and a series of recommendations presented at the UN SG’s Climate Summit (23 September 2014) provided; (c) the importance of equitable access to quality data emphasized, and recommendations on the then draft Report of the UN SG’s Independent Expert Advisory Group on Data Revolution formulated; (d) an expanded vision on the role of STI, science education and capacity-building for sustainable development promoted.