Science, ethics and responsibility, focus of the World Science Forum 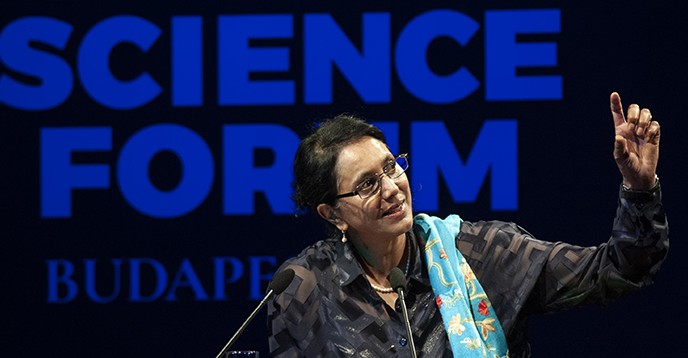 The scientific community gathered at the World Science Forum to focus on the ethical problems scientists face and on the responsibility of researchers for the consequences of their scientific results. In the 21st century, ways of separating the scientific method from values, beliefs and opinions are no longer self-evident, and the complex realities of science call for a greater consensus in the ethical principles of scientific research. The Forum brings together scientists, policy-makers and industry from over 100 countries in Budapest, Hungary from 20 to 23 November 2019, to share experiences and reflect on the future of science.

“We need science that responds to the needs and aspirations of societies, science that is open and participatory, science that is more connected to society and grounded in ethics and human rights” explained Shamila Nair-Bedouelle, Assistant Director-General of UNESCO for the Natural Sciences. “We expect that the results of this World Science Forum will feed into these timely global reflections at UNESCO on the future of science.”

This edition of the Forum marks the 20th anniversary of the first conference that launched the World Science Forum. Organized in 1999 by UNESCO and the International Council for Science (ICSU), the interdisciplinary conference was also an invitation to reflect on the issues of the role and responsibility of science, and the ethical questions of scientific research.

"When talking about freedom of research we must address questions like: How to share resources between basic research and innovation? How can science funding be made more transparent and just? Why is it so crucial for scientists to take part in the policy making process?" stressed László Lovász, President of the Hungarian Academy of Sciences, in his welcome speech.

The Fora are organized every two years to bring the global science community together. “Nations do not work in different sciences: we share the building we are mutually constructing” said János Áder, President of Hungary, in his opening address. “What one begins, the other continues, and ultimately the result can be claimed by all who have contributed to its creation."

Two scientific prizes were given during the opening of the Forum.
Australian science writer and journalist Karl Kruszelnicki received the UNESCO Kalinga Prize for the Popularization of Science, in recognition of his longstanding commitment to fire up people’s curiosity for science and share his passion for the subject. “Dr Karl” has been a science communicator for over 30 years, using television, radio, podcasts, print media, books and social media
The UNESCO Sultan Qaboos Prize for Environmental Conservation as awarded to the Bangalore-based Ashoka Trust for Research in Ecology and the Environment (ATREE) in recognition of its socially-just environmental conservation and sustainable development activities make science accessible to all.

UNESCO is involved in the following sessions:

Science for a Sustainable Future, Investing in Science, Technology and Innovation, Building Capacity in Science and Engineering, Science for Society
Hungary