Restoration completed on Lion of Al-lāt statue from ancient city of Palmyra, damaged by ISIL 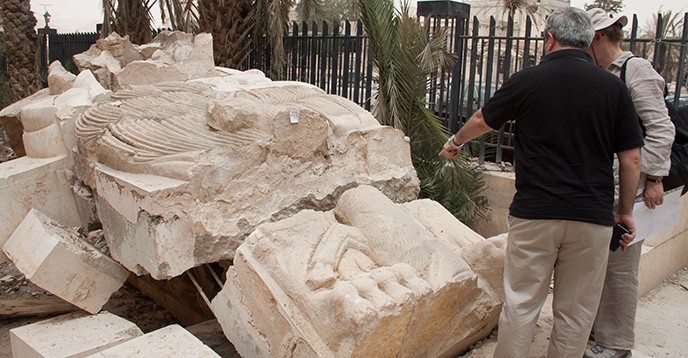 The 2000-year old statue Lion of Al-lāt, that once watched over the ancient city of Palmyra in Syria, stands proudly once again, thanks to UNESCO’s Emergency Safeguarding of the Syrian Cultural Heritage project.

The limestone lion, also known as the Lion Statue of Athena, measuring 345 centimetres and weighing 15 tons, once marked and protected the entrance to the temple of Al-lāt. Since its discovery by Polish archaeologists in 1977, it has been a renowned fixture of the Museum of Palmyra. The statue suffered extensive damage in May 2015, when ISIL forces captured Palmyra, a UNESCO World Heritage site.

“It was an internationally known symbol of Palmyra, it was standing in front of the museum,” explained Polish restorer Bartosz Markowski, who undertook the two-month restoration. At the foot of the statue, between the lion’s legs, lies an antelope, a symbol of the protection that the strong owes to the weak. “It is an exceptional statue,” explains Markowski, “there are no more such statues in Palmyra.” 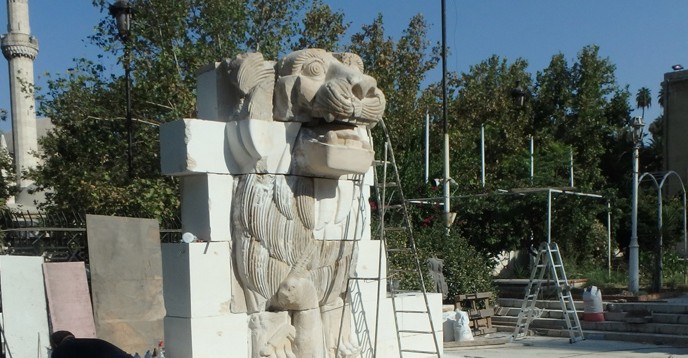 “The restoration of the Lion of Al-lāt is an important achievement with a symbolic dimension,” said Hamed Al Hammami, Director of the UNESCO Regional Bureau for Education in the Arab States and UNESCO Representative to Lebanon and the Syrian Arab Republic. Ha added “It is part of a broader project to protect the unique cultural heritage of Syria, which unfortunately remains at risk.”.

Following a decision unanimously adopted during the 199th session of UNESCO’s Executive Board concerning the Organization’s role in “safeguarding and preserving Palmyra and other Syrian World Heritage sites,” UNESCO sent a Rapid Assessment Mission to Palmyra from 24 to 26 April 2016, supported through its Heritage Emergency Fund.

They discovered that the Museum of Palmyra had sustained considerable damage, statues and sarcophagi too large to be removed for safekeeping had been smashed and defaced; busts had been beheaded and were lying on the ground in ruin. The fragments of the Lion of Al-lāt were moved by the Syrian Directorate General of Antiquities and Museums to Damascus to await restoration.

The Museum of Palmyra housed invaluable artefacts from the UNESCO World Heritage site of Palmyra. An oasis in the Syrian Desert northeast of Damascus, the city of Palmyra was one of the most important cultural centres of the ancient world from the 1st to the 2nd century.
Standing at the crossroads of several civilizations, the art and architecture of Palmyra married Greco-Roman techniques with local traditions and Persian influences. The Lion of Al-lāt is now on display again.

The Emergency Safeguarding of the Syrian Cultural Heritage project works to restore social cohesion, stability and sustainable development to Syria through the protection and safeguarding of Syria’s rich and unique cultural heritage.

This pioneering initiative, funded by the European Union with the support of the Flemish Government and Austria, and undertaken in partnership with the International Centre for the Study of the Preservation and Restoration of Cultural Property and the International Council on Monuments and Sites, protects and safeguards Syrian cultural heritage by providing technical assistance.