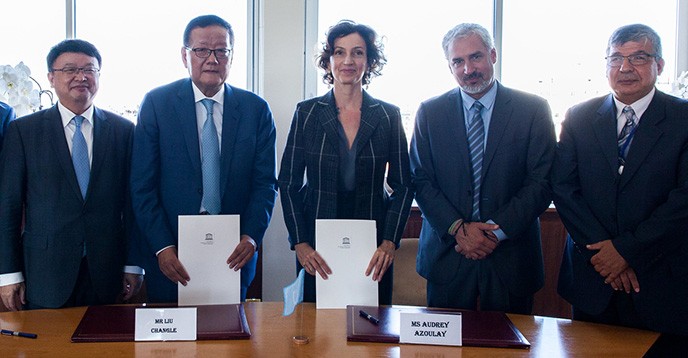 Director-General Audrey Azoulay welcomed the renewal of the partnership, saying “I value Phoenix TV’s continued engagement with UNESCO and wish to give special thanks to the LIU Changle, Chairman and CEO of Phoenix TV, for his personal long-term commitment to the promotion of the Organization’s core values and principles. UNESCO is committed to the protection of heritage and it is essential that we sensitize the largest public to the beauty, fragility and importance of cultural diversity – this is where civil society and partners like Phoenix TV play a vital role, to tell the stories that can inspire people. ”

“I believe in the coming five years, the cooperation between Phoenix TV and UNESCO will be further enlarged with tangible outcomes,” said LIU Changle.

‘’UNESCO wishes to continue the collaboration on the ‘‘Culture of Peace programme’’ and expand our strategic cooperation in education, and interdisciplinary topics like the ethics of AI’’, the Director-General added.

Since it always presents culture and international solidarity as its main corporate value, it is very popular and much watched even by Chinese state political decision-makers, also entrepreneurs, academia, students, and middle class population.