Regional Meeting on Documentary Heritage was held in Tehran this month 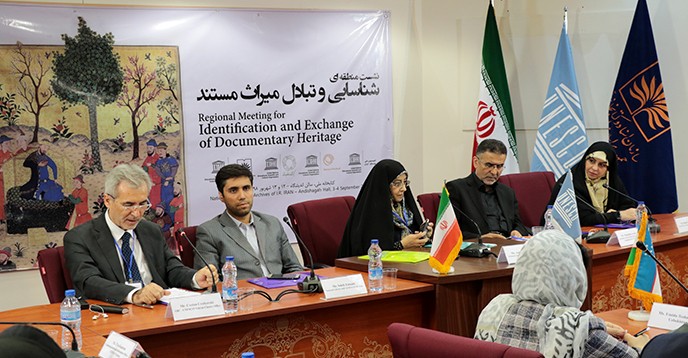 The UNESCO Tehran Cluster Office, the National Library and Archives Organization of Iran and the Iranian National Commission for UNESCO cooperated to hold the Regional Meeting for the Identification and Exchange of Documentary Heritage, from the 3-4 September in Tehran, Iran.

The event brought together the Chairs of National MoW Committees and Directors of National Archives and Libraries from Afghanistan, Azerbaijan, India, Iran, Pakistan, Kazakhstan, Turkey, Tajikistan, and Uzbekistan.

The meeting is a follow up to a regional meeting organized in Tehran in 2017 to “Enhance Cooperation for the Preservation and Access to Documentary Heritage”, where a need to discuss regional cooperation for exchanging and identification of documentary heritage in the region was identified by the participants.

Dr. Ashraf Boroujerdi, Head of the National Library and Archives Organization of Iran, opened the regional meeting by welcoming the international guests and thanking UNESCO for its invaluable mandate in building peace, friendship and cooperation among and between the Nations. She stated that discovering and identifying common heritage of cultures reminds us of a time when nations had constructive and peaceful cooperation and highlighted that returning to this era of intercultural exchange is the best way to prevent wars and violence.

The next speaker was Dr Cvetan Cvetkovski, Officer in Charge of the UNESCO Tehran Cluster Office who referred to documentary heritage as the primary means of knowledge creation. He said: “The Memory of the World expresses the great humanist idea that people from all cultures and faith can unite around common heritage. A very good example of this idea is the history of the Silk Roads, which is one of the themes of this meeting”.  It’s worth mentioning that the participating delegates undertook national inventories of the documentary heritage of their countries. this was the first ever initiative to survey Silk Road documentary heritage collections at the national and sub-regional levels.

Dr Ayyoubi, the Secretary General of the Iranian National Commission for UNESCO talked about the role knowledge for building peace and establishing dialogue, and the fact that the knowledge won’t be gained without considering the tangible, intangible cultural and documentary heritage of societies. He pointed out to the Iranian National Memory of the World Committee as one of the most active committees that is endeavoring to raise public awareness on this issue of the documentary heritage throughout the country.

After the opening speeches, expert sessions started where participants presented country reports on the results of the survey of documentary heritage relating to the Silk Roads at national level.