A reaffirmed cooperation between UNESCO and Cuba 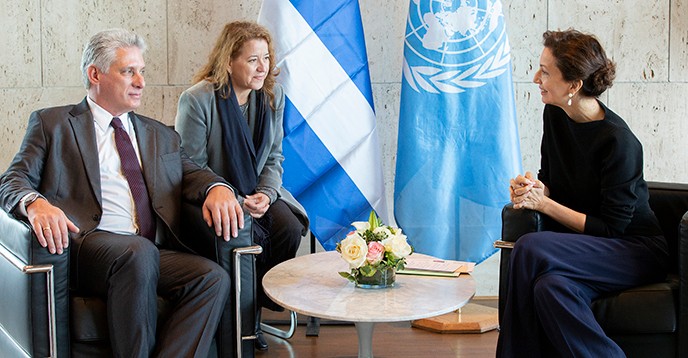 The Director-General of UNESCO, Audrey Azoulay, welcomed for the first time this morning to UNESCO the President of Cuba, Miguel Díaz-Canel Bermúdez. She had met with Cuba's Minister of Foreign Affairs, Bruno Rodriguez Parrilla, last May.

"We welcome the renewed support today by the President of Cuba to UNESCO by stressing the importance of our intellectual contributions in culture, education and science in an unstable world. This reaffirmed cooperation between UNESCO and Cuba is a sign of confidence in our Organization," said UNESCO Director-General Audrey Azoulay at the end of the meeting this morning.

The Director-General accepted the President’s invitation to pay an official visit to Cuba in 2019, on the occasion of the 500th anniversary of Havana, whose old city and fortification system have been inscribed on UNESCO's World Heritage List since 1982.

Cooperation between UNESCO and Cuba is reflected in all of UNESCO's fields of competence. Cuba is distinguished by nine sites inscribed on the World Heritage List, three collections on the Memory of the World Register, and three elements on the representative list of the Intangible Cultural Heritage of Humanity.

Since 1994, UNESCO and Cuba have organized the UNESCO/José Martí International Prize, which rewards an extraordinary contribution to the unity and integration of the countries of Latin America and the Caribbean, to the preservation of their cultural and historical traditions, in accordance with the values promoted by the Cuban politician and writer, José Martí.

In education, Cuba has 12 UNESCO University Chairs and last June, as part of the programme on Management of Social Transformations (MOST), hosted a "MOST School" on scientific knowledge*. In the field of Science, Cuba also has 6 biosphere reserves.

*MOST School: part of the Social and Human Sciences Sector, an activity to develop and strengthen the skills of researchers and decision-makers, to strengthen the research-policy interface to better meet the challenges of the 2030 agenda.