Re-opening of the National Museum of Bagdad 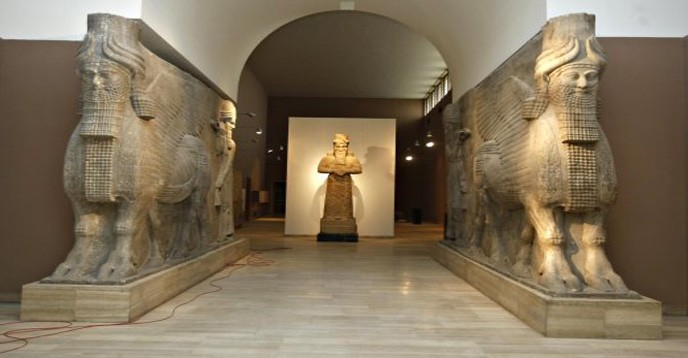 Established in 1926, the National Museum of Iraq is dedicated to documenting and interpreting the history of Iraq and its environs, through its collections comprising objects covering the past 7,000 years. Objects in the collection represent Sumerian, Akkadian, Assyrian, Babylonian and Islamic cultures and in various media, including glass, pottery, metal, ivory, and parchment

Among the major artefacts are the Sumerian sacred vase and the masque of Warka (4th millennium BCE), the head of an Akkadian ruler from Nineveh (ca.2250-2200 BCE), an Assyrian cuneiform slab from Nimrud (first half of 1st millennium BCE), a Babylonian terracotta lion (19-18th century BCE), and a stucco panel from Samarra (9th century CE).

Having sustained extensive damage during  the Gulf War of 1990 - 1991, the museum was closed until April 2000. The armed conflict in March 2003 and the subsequent looting of the National Museum in April led to the loss of many of its objects from its collections. The total number of looted items is debated, yet the Museum management staff has estimated it at approximately 15,000 items, including 5,000 valuable cylinder seals. According to the National Museum, 4,300 objects out of the 15,000 looted from the Museum have been returned.

Since the closing of the Museum in 2003, the authorities and UNESCO have endeavored to coordinate international assistance to revive the National Museum, with Member States, expert communities and partners. Thanks to funding from Japan, the museum laboratory was restored and specialized training for staff provided..

UNESCO Director-General Irina Bokova congratulated the Iraqi authorities for the recent re-opening of the Museum. It has a tremendous significance as a response to the deliberate destruction of the country’s other priceless pieces conserved in the Mosul Museum and those in the region of Nineveh, by confirming the will of the Iraqi Government and support of the international community to highlight this iconic Museum as a defense against intolerance, ignorance and violence perpetrated on the testaments of a nation’s historical past, intercultural exchange and cultural diversity.