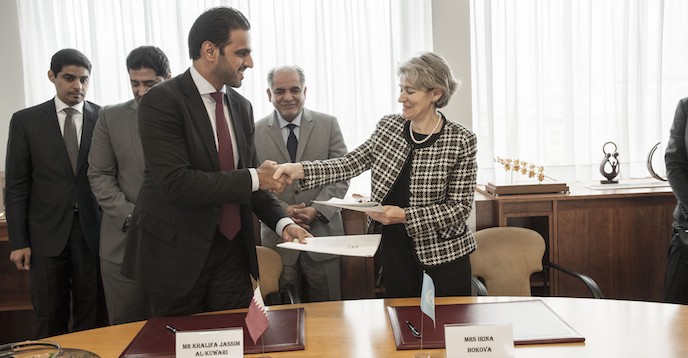 The Qatar Development Fund (QDF) and the United Nations Educational, Scientific and Cultural Organisation (UNESCO) signed today their first Memorandum of Understanding to support the implementation of UNESCO's programme for the protection of cultural and natural heritage in emergency situations.

The MOU provides a $2 million grant as part of a 2014 pledge by H.E. the Prime Minister of the State of Qatar, Abdullah bin Nasser Al-Thani, to donate $10 million to support UNESCO in conserving world heritage sites in areas hit by natural and man-made disasters.

UNESCO's Programme for Heritage Emergency Preparedness and Response aims to enhance UNESCO's ability to assist Member States in reducing the risks to their cultural and natural heritage and ensure a timely and effective response in emergency situations to ensure their safeguarding.

"This contribution is a direct response to the destruction of cultural heritage in times of conflict, and I take this as a call for all Member States and partners to join forces to halt cultural cleansing,”

Khalifa Jassim Al Kuwari, Director General of the Qatar Development Fund, explained the idea behind the memorandum of understanding is twofold.

“The Qatar Development Fund is committed to protecting and preserving heritage globally, by supporting the Heritage Emergency Fund. We believe that our contribution will act as a catalyst that will trigger multiple donors’ engagement in safeguarding heritage that is in danger of being lost forever through catastrophes, conflicts and neglect.”

The Heritage Emergency Fund will support capacity building and training activities for professionals in conflict situations and emergency response activities.

Signed at UNESCO headquarters in Paris, the agreement comes as the 38th session of the General Conference of UNESCO has adopted a comprehensive strategy for the protection and promotion of culture and pluralism in times of war.

The Qatar Development Fund, on behalf of the State of Qatar, is responsible for the implementation of international development programs through the provision of loans, grants and technical assistance to developing countries and key charities.

#Unite4Heritage is a global movement powered by UNESCO that aims to celebrate and safeguard cultural heritage and diversity around the world. Launched in response to the unprecedented recent attacks on heritage sites, the campaign calls on everyone to stand up against extremism and radicalization by celebrating the places, objects and cultural traditions that make the world such a rich and vibrant place.

Culture in Emergencies, Partnerships, Protecting Our Heritage and Fostering Creativity