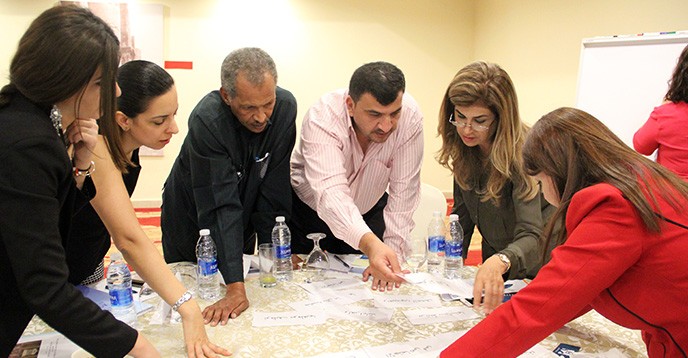 In keeping with its commitment to contribute to gender equality and women’s empowerment in and through the media, UNESCO, with support from Sweden, held a comprehensive training session for broadcasting members of the Arab States Broadcasting Union, as well as private media, in Amman, Jordan from 30 July to 1 August 2017.

The training session brought together 20 focal points from broadcasters around the region to develop action plans that will assist in putting gender transformative policies together, using the framework of UNESCO’s Gender Sensitive Indicators for Media (GSIMs).

The Gender Sensitive Indicators for Media encourage news and media organizations to think critically about how their workplace practices and the content they produce contribute to gender stereotypes in society.

“UNESCO is committed to gender equality as part of the 2030 Sustainable Development Goals agenda. This training is part of that commitment, as it allows for UNESCO Member States to come together through their national broadcasters and build their capacity to address gender gaps and stereotypes that can have a negative impact on society,” Mirta Lourenço, UNESCO’s Chief of Section for Media and Society said.

Ms Riham Abu Atiah, programme director at the Palestinian Broadcasting Corporation said, “After this workshop, we now have the knowledge on how to change policies within our broadcast organisations to ensure the content of the news we produce has gender equality at its heart”.

Mr Yassin Ibrahim Director of the General Directorate of Programs and Production for the Sudanese Broadcasting and Television Authority Khartoum said it was he was delighted to be part of the training. “It was an excellent opportunity to learn about the nature of the problems of gender balance and to deal with their challenges. Our action plan will enhance our capabilities to achieve gender equality in media”.

Mrs Hanaa Abd El Salam, Director General of News from Egyptian state broadcaster, the National Media Authority, said “This workshop has been enlightening because not everyone is aware of the challenges we face in gender equality. We have a traditional view of gender in our images and culture, which cannot be broken easily. We can challenge these images now, by having tools such as a women’s source handbook, so we can call on women experts in the region.

Randa Yassir, regional expert on gender who lead the training, said, “This was a most enthusiastic group and I have full confidence that they will implement their action plans in their broadcasting organizations. Discussions on the issues around gender equality in workplace practices and in the content produced were enthusiastic and robust. The group could benefit from further support on gender issues from Member States and follow up for implementing their action plans.

The Gender Sensitive Indicators, Arabic version, was launched at the end of the training, with the express hope that Member States and broadcasters, as well as media organizations, civil society organizations and journalism schools, will take up the GSIMs in the region to promote gender equality in and through the media.

The indicators have at their heart, international instruments and conventions, such as the Convention on the Elimination of All Forms of Discrimination Against Women(link is external) (CEDAW) and the Beijing Declaration and Platform for Action(link is external). UNESCO’s commitment and strategy for gender equality is well formulated in the “Priority Gender Equality Action Plan 2014 – 2021” stating, “Through the GSIM, UNESCO will encourage media organizations, particularly those which are public service institutions, to address gender inequalities. Empowerment through the media includes action to empower women in and through the media, through enhanced freedom of information, and through the promotion of safety of women journalists, particularly in post-conflict situations”.