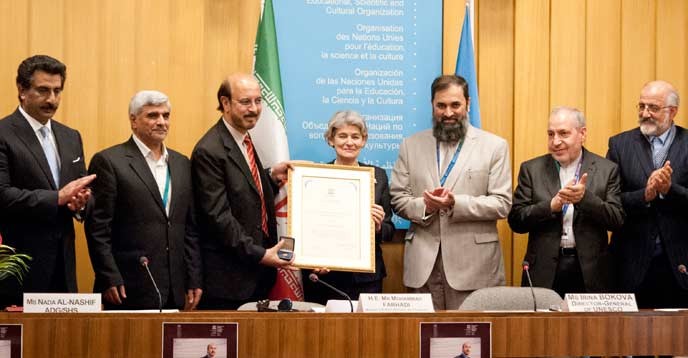 UNESCO’s Director-General, Irina Bokova on Wednesday awarded the 2015 UNESCO Avicenna Prize for Ethics in Science to Pakistani Professor Zabta Khan Shinwari. The award ceremony was held at UNESCO Headquarters in Paris in the presence of Mohammad Farhadi, Minister of Science, Research and Technology of the Islamic Republic of Iran, and Muhammad Baligh ur Rehman, Minister of State for Education, Trainings and Standards in Higher Education of Pakistan.

“We need science that is founded on ethics and human rights,” said the Director-General. “To move forward, we must combine progress with high standards of responsible research, with scientific integrity, with risk management for societies and nature. This calls for well-informed leaders and public opinion, where all are included in making decisions on vital issues for human life and for enlightened scientists and scientific educators, working and communicating in a transparent way” declared Ms Bokova, speaking at the Award ceremony.

Professor Shinwari said the Prize did not only honour him, “but all those throughout the world who work in the face of hostile environments, but never compromise on matters of principle. We cannot confront bioterrorism physically but through ethical education we can strive for the requisite character-building of our future generations, who will be the flag bearers for peace, security and tranquility.”

The laureate went on to insist on the need for critical examination and open dialogue in science and said this implied tackling a wide range of ethical issues, notably eliminating gender inequalities.

The award to Professor Shinwari comes in recognition of his scientific and educational work in biotechnology, biosafety and biosecurity. It also rewards his contribution to advancing the social responsibility of science and his work to promote the participation of indigenous peoples and women in science, including his defense of the intellectual property rights of indigenous groups.

Professor Shinwari, Secretary-General of the Pakistan Academy of Sciences and Chair of the Biotechnology Department of the Quaid-i-Azam University of Islamabad, is a specialist in plant biotechnology and ethnobotany, the interaction between plants and humans.

The award includes the Gold Medal of Avicenna, a diploma, a financial award of US$ 10,000 and an invitation to conduct an academic visit to the Islamic Republic of Iran.

Established in 2002 by the Executive Board of UNESCO on the initiative of the Islamic Republic of Iran, the UNESCO Avicenna Prize for Ethics in Science is awarded every two years. The purpose of the Prize is to reward the activities of individuals and groups in the field of ethics in science. The Prize encourages ethical reflection on questions raised by scientific and technological advances. It is named after the Persian physician and philosopher known in Europe as Avicenna (980-1038CE), who developed a holistic approach towards an ethical behaviour of scientists.

Please check the side-events of the General Conference and e-journal for more useful information.

Science for a Sustainable Future, Social and Human Sciences, Science for Society, Ethics of Science and Technology
Pakistan