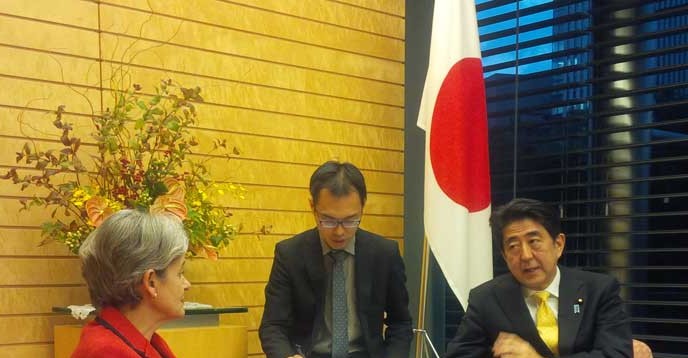 Prime Minister Shinzo Abe of Japan pledged to take forward his country’s broad-ranging cooperation with UNESCO in a meeting with Director-General Irina Bokova in Tokyo on 7 November.


He expressed hope that the World Conference on ‎Education for Sustainable Development (ESD), opening in Aichi-Nagoya on 10 November and welcoming over 1,000 participants, would promote ESD in the international community well beyond the Decade that is coming to a close. The Director-General affirmed that the Conference testified to the leadership of Japan, recalling that the country was at the origins of the ESD Decade launched in 2005.

In the area of culture, referring to the inscription of the Tomioka Silk Mill on the World Heritage List in 2014, Prime Minister Abe noted that he had recently observed large numbers of tourists visiting the site, bearing witness to the significance of the site as a cultural property.

"Japan is a very strong partner for UNESCO, with very close ties," said Ms Bokova, underscoring strong cooperation in education, tangible and intangible cultural heritage, and the sciences, and recalling that the first UNESCO Club was founded in Sendai in 1947.

She drew attention to the Programme for the Enhancement of Literacy in Afghanistan, generously supported by Japan, and to her recent visit to Iraq, stressing the importance of UNESCO's role in empowering people with education, promoting the diversity of cultures and fostering mutual understanding.

"This is how we participate in the concerted response to terrorism and extremism, and we share much with Japan in this fight," she said.

Prime Minister Abe reiterated that "Japan will continue to contribute to fulfill the mission of UNESCO’s Constitution,"  and expressed his support for the Director-General’s leadership of the Organization’s reform process. This support was echoed in a meeting with Mr Kentaro Sonoura, Parliamentary Vice-Minister of Foreign Affairs.

Ways to strengthen youth engagement and private sector partnerships with UNESCO informed discussions at a dinner hosted in the Director-General’s honour by the Minister of Education, Culture, Sports, Science and Technology, Mr Hakubun Shimomura, at the exclusive State Guest House, in the presence of several company executives.

The dinner was a refined celebration of Washoku in autumnal tones, the traditional dietary cultures of Japan, inscribed as intangible cultural heritage in 2013. The Minister underlined the importance of showcasing success stories, citing an ESD project that had turned around low-performing schools by forging close ties with the local community, or private sector contributions to a Government fund set up to significantly increase the number of Japanese students studying abroad, and foreign students coming to Japan.

This is a ‘pre-emptive investment because companies need globally minded human resources. We are transitioning towards a new model of public-private partnerships that could be extended to other areas,’ the Minister said.

He highlighted the impact of climate change and global warming in Japan, stressing the need for collective answers. The Director-General praised Japan for its vision, initiatives and commitment to UNESCO, affirming that education is the foundation of sustainability.

Ms Bokova engaged with a wide range of business leaders during a lecture on ‘UNESCO’s Soft Power Agenda’ to the Japan Association of Corporate Executives – Keizai Doyukai – chaired by Mr Yasuchika Hasegawa.

The association, founded in 1946, counts some 1,300 top executives. She outlined examples of trendsetting and innovative cooperation worldwide with the private sector, affirming that “private-public partnerships are essential parts of the ‘soft power’ toolbox we need to shape a more inclusive, sustainable and just future for all.” She highlighted the need for partnerships to be anchored in common values and objectives, and creative in form and substance.