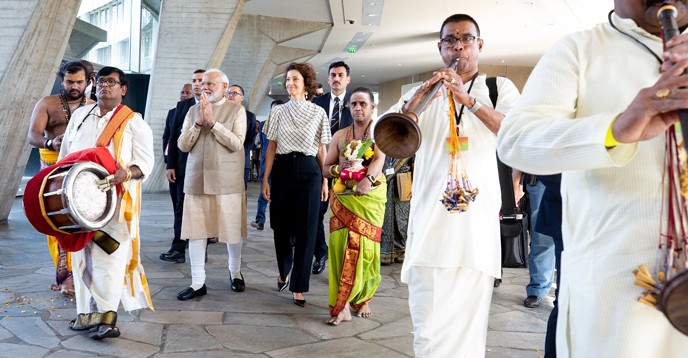 UNESCO Director-General Audrey Azoulay warmly welcomed India’s commitment to the Organization, its work and the ideals it promotes at the end of a visit to UNESCO by India’s Prime Minister Narendra Modi on 23 August.

Talks with the Prime Minister focused on the Organization’s major initiatives in favour of girls and women’s education, the holistic Revive the Spirit of Mosul project benefitting the devastated Iraqi city, and work underway to define an ethical framework for the development of artificial intelligence.

During the discussion, the Prime Minister urged UNESCO to accelerate efforts to protect cultural diversity in Iraq, as an integral part of the Revive the spirit of Mosul initiative.

The New Delhi-based UNESCO Mahatma Gandhi Institute of Education for Peace and Sustainable Development is a major partner in the Organization’s work on the ethics of artificial intelligence, with a special focus on education. UNESCO recently published The State of the Education Report for India 2019, as part of its undertaking to rethink the future of education for the 21st century.

Prime Minister Modi ended his visit to UNESCO with an address to representatives of India’s expatriate community in France.