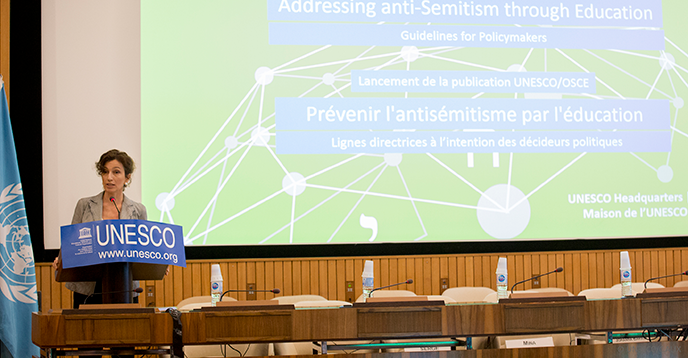 UNESCO and the OSCE Office for Democratic Institutions and Human Rights (ODIHR) today released a joint publication, Addressing Anti-Semitism through Education – Guidelines for Policymakers, at a launch event at UNESCO Headquarters in Paris.

The publication, Addressing Anti-Semitism Through Education – Guidelines for Policymakers, is the first on the subject by a United Nations agency. Produced with experts from the countries of Europe, Central Asia and North America, it examines the many and complex manifestations of anti-Semitic prejudice and discrimination and offers best practice recommendations to fight them through education.

UNESCO is strongly committed to work on the prevention of violent extremism as part of its core mandate to promote global citizenship, a priority for the 2030 Sustainable Development Agenda. In this context, UNESCO promotes education systems that are able to equip learners with skills, attitudes and behaviours that allow them to assume active roles in facing and resolving global challenges, and to become proactive contributors to a more peaceful, tolerant and secure world. The publication is a new example of UNESCO’s contribution to the fight against anti-Semitism.

UNESCO will organize a high-level debate on the subject within the framework of the General Assembly of the United Nations next September to mobilize the international community.

“The struggle against anti-Semitism cannot be undertaken by Jewish communities alone. Fighting it means defending human rights and liberties, because racism and anti-Semitism are one and the same in that they share hate of otherness,” declared UNESCO Director-General Audrey Azoulay, at the launch ceremony. “In this fight, education is a major factor. It must be harnessed to prevent the rise in extremism and violence. It is our responsibility to support teachers and educators in their mission, those who sometimes feel helpless in facing the scope of unbridled prejudice.”

ODIHR Director Ingibjörg Sólrún Gísladóttir, stressed the vital role of education in countering anti-Semitism, and all forms of intolerance: “Educators have access to a uniquely large audience of young people and have the opportunity to help them foster mutual respect and understanding, and thereby become responsible citizens. Resilience to language and ideas that incite discrimination can only be ensured by educating young people so that they are mindful of their own and others’ prejudices and capable of critical thinking, and that they feel responsible for making the societies in which they live cohesive ones.”

On 22 May, UNESCO and ODIHR presented an outline of the publications to ministers responsible for education, culture, youth, media, communication and sport of the European Union’s 28 Member States, at a meeting chaired by Bulgaria.

UNESCO and the Office for Democratic Institutions and Human Rights had earlier worked together on the publication of Guidelines for Educators on Countering Intolerance and Discrimination against Muslims (2011).