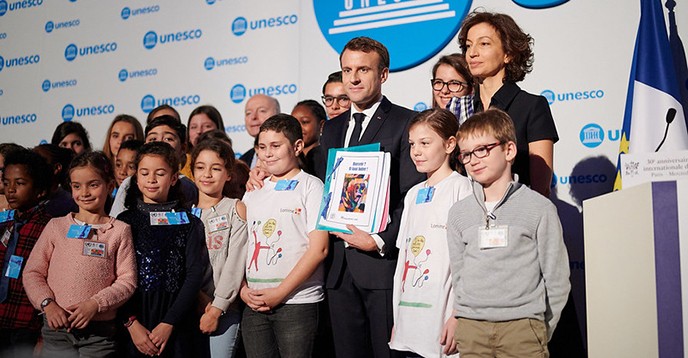 Paris, 20 November—UNESCO on Wednesday celebrated the 30th anniversary of the Convention on the Rights of the Child with a conference attended by 400 youth and several personalities, including the President of France, Emmanuel Macron, who opened the event.

“We need to protect the private lives and data of children, protect our children from online harassment and hate,” declared President Macron, calling for “a new type of international commitment […] with regard to international players.” The President went on to express his country’s wish to initiate “a new international policy declaration for the protection of children in the digital environment.”

In her address, UNESCO Director-General Audrey Azoulay stressed that it is essential to focus efforts in education on the development of critical thinking.” Jacques Toubon, France’s Defender of Rights, co-organizer of the event, said that “ignorance of the rights of children is in and of itself a form of violence.” He also reiterated “the need to ensure that “the best interests of the child be a primary consideration,” in line with a key provision of the Convention.

Under the banner Time to Commit, the conference gave the floor to young people selected during a consultation organized by the Defender of Rights of France and UNESCO’s  Associated Schools Network. A young participant who identified himself as Ritchie, a member of the Traveller Community, made a rousing appeal to fight discrimination at school, saying that all too many pupils were still prey to harassment due to their appearance or origin. He was warmly applauded when he declared that “it is the duty of the young to rise up in defence of their right and fight for a more just world.”

Côte d’Ivoire Education Minister Kandia Camara was among the participants at the conference, alongside the Vice Chairperson of the United Nations Committee on the Rights of the Child, and the UN’s Special Rapporteur on the right to education, Koumbou Boly Barry.

The Convention on the Rights of the Child was adopted by the UN General Assembly on 20 November 1989. It is the most widely ratified international instrument to date. But the rights of the child are still not fully respected. Every year, 12 million girls are married before the age of 18 (1) and 262 million children and adolescents aged 6 to 17, i.e. 18% of youth, were out of school in 2017 (2), despite the obligations undertaken by the signatories of the Convention.

UNESCO contributes to the implementation of the rights of children, notably concerning access to education, freedom of expression, information, culture and art. It recently published a Right to Education Handbook to facilitate the universal exercise of this right and interactive information about the Convention is included in two handbooks published by UNESCO and the United Nations Office on Drugs and Crime (UNODC) for primary and secondary education teachers which are available in English and Spanish.