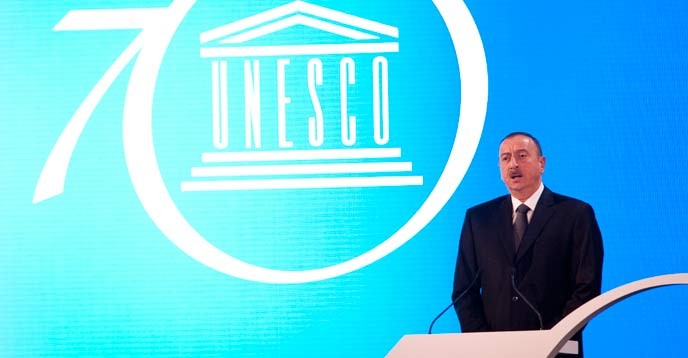 The President of Azerbaijan, Ilham Aliyev, this afternoon addressed the Leaders’ Forum, which since yesterday has brought together Heads of State and Government, ministers, ambassadors and high level participants from around the world in the context of the 38th session of the General Conference of UNESCO, under the Presidency of Stanley Mutumba Simataa.

Speaking in the presence of UNESCO Director-General Irina Bokova, President Aliyev paid tribute to UNESCO’s contribution to peace and progress around the world. “UNESCO plays a vital role in human development, encourages intellectual discussion, promotes cooperation among Member States and participates actively in the work of the United Nations.”

Mr. Aliyev affirmed that the Republic of Azerbaijan, which joined UNESCO 23 years ago, was firmly committed to close cooperation with the Organization and to the “Baku Process” for the advancement of intercultural dialogue.

For Azerbaijan, the President said, “multiculturalism is not just an idea, it is our tradition, a state policy and our lifestyle.” He expressed hope for the emergence of a global society oriented toward intercultural dialogue, which is needed today more than ever before.

President Aliyev, furthermore, appealed to “the international community’s commitment and responsibility to address the causes of extremism, radicalism, intolerance and racism” which, he said, “should be accompanied by more support and trust to UNESCO.”