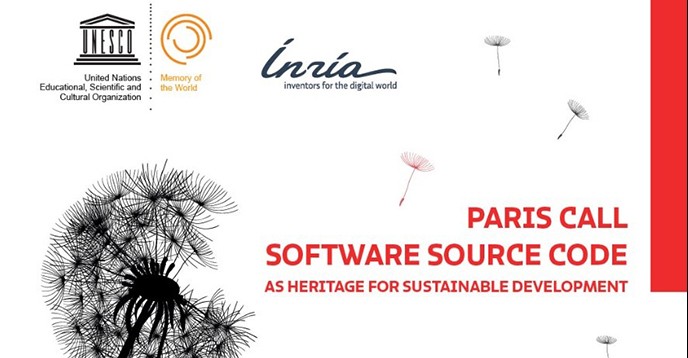 What does the navigation system of NASA’s 1969 Apollo mission have to do with an app on your phone? Most likely, more than one would think. Working with Inria, the French national research institute for the digital sciences, UNESCO is supporting the Paris Call, an effort to raise awareness about the preservation and access to software source code as a pillar of our present and enabler of our future.

“Preserving software source code as heritage”, says Moez Chakchouk, UNESCO’s Assistant Director-General for Communication and Information, “is a significant means for capitalizing on the knowledge built over humankind’s recent history in order to foster innovation and advance our understanding of ourselves and of our environment: preserving the technological and scientific knowledge embodied in software source code is therefore crucial and captures human civilization”.

The call is aimed at the full spectrum of players in the realm of software development, from governments to business to civil society to the tinkerer dreaming of the next transformative technology. With a mind toward software source code as heritage for sustainable development, the Paris Call goes a few step further.

It includes the need to raising awareness of the importance of software source code among decision makers, recognizing software creators and the contributions of women and minorities to digital innovation. The Call argues for greater access to software source code and capacity building in order to ensure that citizens, and young people in particular, are empowered with sufficient skills and literacy to fully participate in today’s increasingly digital connected societies. The expert report annexed to the Paris Call highlights the importance of preserving software in general, and software source code in particular, as important levers for sustainable development, and regrets that  the role of software development in all fields of innovation is still largely underrated, as is the recognition of software source code as an intellectual effort and as the repository and expression of a part of our knowledge.

“The Paris Call”, says Mr. Roberto Di Cosmo, director of the Software Heritage Initiative launched by Inria and UNESCO, “is a strong basis to imagine and build new actions around the preservation of software source code, and sustain Free and Open Source Software development”.

Software source code preservation and sharing is at the core of the cooperation between UNESCO and Inria, in line with UNESCO’s concept of inclusive knowledge societies based on four pillars: freedom of expression, universal access to information and knowledge, respect for cultural and linguistic diversity, and quality education for all.

In this respect, the Paris Call builds on work being implemented by UNESCO within the framework of the Memory of the World (MoW) Programme, particularly in response to the 2015 Recommendation Concerning the Preservation of, and Access to, Documentary Heritage Including in Digital Form.