UNESCO hosted the pre-screening of the film “The Forgiven”, in the presence of Audrey Azoulay, Director-General of UNESCO, Forest Whitaker, Actor and UNESCO Special Envoy for Peace and Reconciliation, and Roland Joffé, Film Director, and Jean Lemierre, President of BNP Paribas, at UNESCO Headquarters in Paris, on 15 December 2018. The event, organized in partnership with SAJE Distribution and BNP Paribas, supported by Air France, closed UNESCO’s yearlong celebration of the 70th anniversary of the Universal Declaration of Human Rights.

Audrey Azoulay expressed her delight that UNESCO, house of education, the sciences and culture, was chosen to screen the film “The Forgiven” at such a special occasion. Recalling the role of cinema in fostering exchange, understanding and empathy, the Director-General praised Forest Whitaker for his tireless efforts as UNESCO Special Envoy to “repair broken connections, particularly among youth populations.” Jean Lemierre added that "it is essential that companies engage with young people, and help empower them to take charge of their destiny."

“The Forgiven” is a film based on the play The Archbishop and the Antichrist by Michael Ashton that tells a story involving Archbishop Desmond Tutu’s search for answers during the Truth and Reconciliation Commission, and his meetings with the fictional character Piet Blomfeld. After the end of apartheid, Archbishop Desmond Tutu (Forest Whitaker) is running the Commission and visits Cape Town's Pollsmoor Maximum Security Prison to meet with Piet Blomfeld (Eric Bana), an ex-South African Defence Force officer and Afrikaner Weerstandsbeweging member, to assess his candidacy for amnesty. Blomfeld is a potential witness to murders committed during the time of Apartheid, particularly the murder of the teenage daughter of Mrs Morobe, who begs the Archbishop to find answers about her missing daughter.

The film’s message of forgiveness and healing as prerequisites for just and compassionate societies especially resonates this year as we celebrate the 70th anniversary of the Universal Declaration of Human Rights and 100 years since the birth of Nelson Mandela. 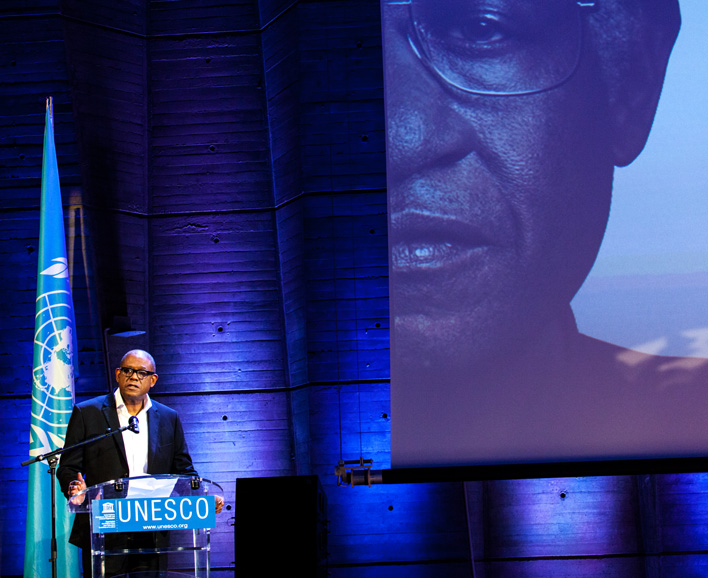 “It is always inspiring to see people coming together to watch a movie about justice, ” said Forest Whitaker. “It is really an honor to be part of the UNESCO community – such a beautiful context for the film to be shown – a context of education, of bringing peace in the minds of people. I hope that the movie conveys the message of peace-building of which I learned so much in South Africa.”

The pre-screening was followed by a discussion with Roland Joffé and Forest Whitaker moderated by Nada Al-Nashif, Assistant Director-General of UNESCO for Social and Human Sciences. For Joffé this film aimed to bring to the fore the humanity that is inherent in and connects every individual. Whitaker noted how important it is that every person decides to take a stand in favour of human rights. “We have to look even at the smallest of situations and see how we can change them. You can do it … with your heart! Change will occur.”

"The Forgiven" was screened at the London International Film Festival in October 2017 and was released in the United States of America on 9 March 2018. The film will be released in France on 9 January 2019.