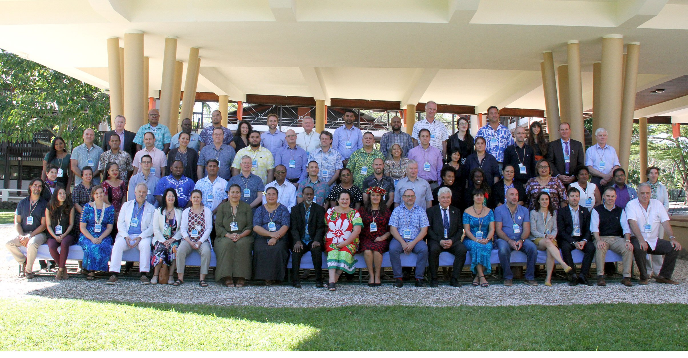 UN Decade of Ocean Science Workshop at the Pacific Community emphasizes need to bring much needed ocean science, but with the SDGs in mind at all times.

It was organised in plenary sessions and themed workshops focusing on Decade six main expected societal outcomes: a clean ocean, a healthy and resilient ocean, a predicted ocean, a safe ocean, a sustainably harvested and productive ocean, and a transparent and accessible ocean.

The aim of the meeting was to help prepare the upcoming Decade, consult its different parties, and engage the regional stakeholders. It was also intended to identify more specific regional scientific goals, but also the sustainable development requirements of the vast Pacific Ocean.

The South Pacific region is the largest ocean space in the world, home to many varied ecosystems, atolls, coral reefs, mangroves, covering almost one third of the Earth. Spread over 45 million square km, the Pacific Islands are made of 22 island nations, with combined Exclusive Economic Zones over four times bigger than the entire European continent.

But it is also a vulnerable region, facing many challenges and threats from climate change, biodiversity loss, and where the livelihoods of people fundamentally depend on the ocean.

The meeting was hosted by The Pacific Community (SPC), the main scientific and technical organisation for the region.  With 26 members, it works using a framework vision of Pacific Regionalism with shared challenges and solutions. Its focus is on development, environment, climate, ocean science, and in interdisciplinary and cross-cutting issues such as health, food security, or sustainable economic development, and ultimately well-being of Pacific Peoples.

The consultation started with opening remarks from Cameron Diver, Deputy Director-General of the Pacific Community. He highlighted the urgency of the situation, citing climate change as one of the biggest threats to the Pacific Islands’ Peoples. He said the ‘science we need now, for the ocean we both want and need is critical. It is urgent. If we save our ocean, we save our people, traditions, cultures and future’. He highlighted that the regional component of the Decade should be determined by the Pacific Community and the people of the Pacific as this region is best placed to both understand the greatest challenges caused by the existential threat of climate change whilst driving resilient, effective and robust solutions to overcome the risks posed to our ocean.

Vladimir Ryabinin, Executive Secretary of the Intergovernmental Oceanographic Commission of UNESCO, followed with a presentation showcasing the overall science objectives of the Decade and the current level of science capacity. He said the needed breakthroughs in mapping of the ocean, observations, ecosystem knowledge, data and information work, modelling and prediction, disaster risk reduction, ocean literacy and education. The idea is to enable massive societal applications of ocean science. New initiatives should be identified capitalizing on existing systems.

Julie Rigaud, Coordinator at IOC, followed by presenting the timeline of future workshops, and the next phases of the preparatory process, that will include a second Global Planning Meeting and a launch meeting in Germany in April 2021. Followed a panel discussion on the vision for the Decade, with participants engaging through questions and digital tool Slido.  The speakers highlighted the importance of traditional knowledge and discussed how Indigenous science and “western science” ought to be combined to promote authentic custodianship of the Pacific Oceanscape. Jacqueline Evans, of the Cook Islands, said the Pacific has something to teach the world about the way they view the ocean, as part of them.

Jens Kruger, ocean affairs Director at SPC and Executive Planning Group member of the Ocean Decade, said the Decade provides a once in a lifetime chance to reverse the ocean’s decline. He also said it should serve our societal needs, by stating ‘we don't need ocean science for science’s sake, but for sustainable development’, joining disciplines together.

On the last day, break-out sessions group facilitators reported back from the workshops. Initial conclusions demonstrated the need to continue the brainstorming, desirably with the help of a dedicated regional working group, and to prepare a regional chapter of the Decade Implementation Strategy.

Another important objective of the meeting was to build trust between scientists and journalists and create long-lasting relationships to communicate the Decade. This was done during a pre-workshop media masterclass hosted by The Pacific Community and IOC and sponsored by Australian Aid. Participants engaged in presentations and interactive sessions that included digital filmmaking skills and science communications. Journalists from the region were able to engage with scientists and discuss key messaging and outputs.

A letter of intent to strengthen cooperation was signed on the last day of the workshop, between IOC and SPC. It relates to future activities under the Ocean Decade, particularly in terms of facilitating the engagement of Pacific Island Nations in the development and implementation of joint projects and initiatives, strengthened collaboration on data and information exchange, marine spatial planning, ocean literacy, early warning systems, capacity development, logistical cooperation and arrangements such hosting of staff and/or experts.

One Planet, One Ocean, The Ocean and Climate Change, Preserving the Ocean, Tsunami and Ocean Hazards, Monitoring the Ocean
New Caledonia