Ocean Science Day celebrates the benefits of science for society and rallies government, scientists and the public around preparations for the United Nations Decade of Ocean Science for Sustainable Development (2021-2030) 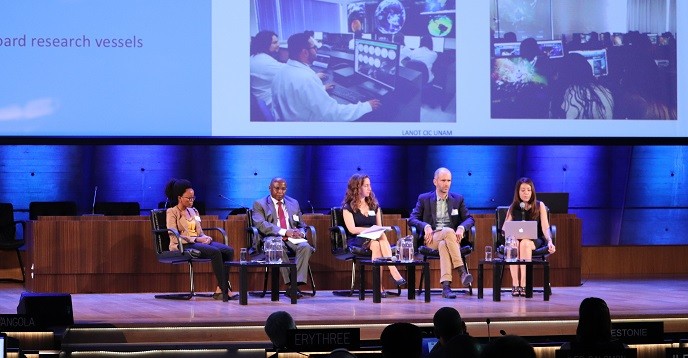 Ocean scientists, country representatives and concerned citizens gathered together for the celebration of Ocean Science Day, on the margins of the 30th Session of UNESCO’s Intergovernmental Oceanographic Commission (IOC) Assembly (26 June – 4 July 2019).  The half-day event offered an opportunity to discuss the contribution of ocean science to society in the next decade.

The ocean health is deteriorating: rising sea temperatures, overfishing, loss of oxygen and increasing seawater acidity are posing major threats to marine ecosystems and their capacity to provide services essential to life.

Achieving a healthy ocean is vital not just for our planet, but equally essential for a rapidly growing human population and demand for resources.

For decades, science has provided salient, timely and policy relevant advice to policy-making, from recovering the ozone layer, to mitigating and adapting to climate change. Nowadays, our changing world calls for even more science, and for a science that benefits society.

“To this end, the United Nations Decade of Ocean Science for Sustainable Development (set to begin in 2021) will provide a platform for redirecting science towards meeting society’s goals in terms of a clean, productive and resilient ocean” said Prof. Peter Haugan, Chair of UNESCO’s IOC during his Ocean Science Day opening address.

Designed to be an informal exchange among scientists, Member States, engaged citizens and representatives from international organizations and the private sector, the event stirred a lively and multi-faceted debate about one of the central questions for the Decade of Ocean Science: what scientific knowledge do we need for the sustainable development of our ocean and society?

If “co-production of knowledge by the scientific community, indigenous and local communities, the private sector and many other stakeholders is required for a better understanding of the effects of multiple ocean stressors and their interaction on the world ocean”, it is also true that, “in a planet under pressure, the main challenge for marine science is probably to get out of the science box and reach out to meet a number of pressing societal needs” reiterated Peter Haugan to the delegates in the room.

“What is needed here is an evolution in the way we conduct oceanography and a real social contract for ocean science. We need to achieve a paradigm shift in ocean science organisations for oceanography to meet the six societal needs identified for the Decade: a clean, healthy and resilient, sustainably harvested, safe, predicted and transparent ocean” said Dr. Vladimir Ryabinin, IOC’s Executive Secretary.

To be truly inclusive and transformative, the Decade will have to bring each and everyone into the discussion, “valuing the potential that every single person has to contribute to developing ocean science” said Kerstin Forsberg, Founder of the NGO Planeta Océano. Planeta Océano works to conserve and restore coastal and marine environments in Latin America through a focus on scientific research, environmental education, citizen science and sustainable development initiatives.

Education – and ocean literacy in particular – will play a key role in making people aware of the importance of a healthy ocean for the benefit of society and the planet as a whole. A little girl of today who collects data on marine turtle nesting could be tomorrow’s policy maker who will pass laws on coastal management.

Communication will also be crucial to make people understand why we need a healthy ocean. Peter A. Thompson, Senior Principal Research Scientist at the Commonwealth Scientific and Industrial Research Organization (CSIRO) put it simply:  “We need to take our science to the public and make them appreciate what it means to have a healthy ocean”. During the event’s closing remarks, Elva Escobar-Briones from the Autonomous University of Mexico further strengthened this concept: “we need to expose people of all walks of life to science,” she commented.

Following the Ocean Science Day morning session, the IOC Assembly continued to address preparations for the UN Decade of Ocean Science well into the afternoon. The Secretariat reported on the work completed since the proclamation of the Decade by the UN General Assembly in December 2017, including the creation of an Executive Planning Group with leading experts from around the world, and the organization of a First Global Planning Meeting in May 2019 in Copenhagen, Denmark.

In a fervent presentation, the United Nations Secretary General Special Envoy for the Ocean, H.E. Mr. Peter Thomson exhorted the ocean community not to “undershoot our ambitions for the Decade,” further cautioning that “National governments need to be at the core and increase their support to the Decade.” He encouraged IOC Member States to step up with budgetary resources, national planning and full engagement with the Decade, starting by increasing national contributions to the IOC’s budget. Because no one can achieve such ambitious goals on its own, partnerships will be of the utmost importance for the Decade to successfully deliver the ocean we need for the future we want.

As coordinator of the Decade Preparatory Phase, IOC-UNESCO will mobilize worldwide governments and national actors through eight regional workshops across all ocean basins and a Second Global Planning Meeting scheduled for May 2020. The May global meeting will finalize the Decade’s Preparatory Phase, and launch an Implementation Plan to be presented at the second UN Ocean Conference in June 2020 and to be considered by the UN General Assembly ahead of the Decade’s official launch in 2021.

Ready to take part in the UN Decade of Ocean Science for Sustainable Development? Visit http://oceandecade.org

Head of the Marine Policy Section and Focal Point for the Decade, IOC-UNESCO

One Planet, One Ocean, Preserving the Ocean