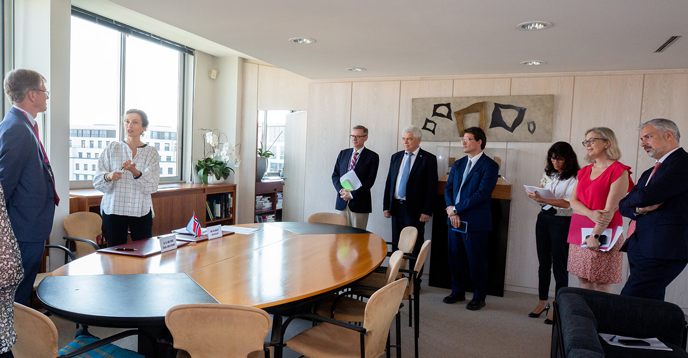 This new partnership, general in its scope, covers many of UNESCO's peace-building activities. Norway is notably increasing its support for education, the protection of World Heritage, particularly natural sites in Africa, as well as also for UNESCO's promotion of free, independent and pluralistic media. The agreement also foresees accrued support for activities concerning artistic freedom and creativity, sustainable management of the ocean and coastal areas, and the promotion of cultural pluralism in the event of armed conflicts and natural disasters.

The $14.8 million (NOK 128.5 million) partnership agreement marks a significant increase in the government's voluntary contribution. The Ministry of Education and Research's contribution reflects the unprecedented priority given by the Ministry to a multilateral organization. Ms Iselin Nybø, Minister of Education and Research, thus confirms support for UNESCO and its work. Another significant and unprecedented increase concerns Norway's contribution to UNESCO’s work protecting culture, with a contribution of $4.2 million (compared to $570,000 in previous years).

During the signing ceremony, the Director-General of UNESCO, Audrey Azoulay, said: "I am grateful to Norway for its exceptional support to UNESCO. I see this signing as a natural extension of the first MOPAN evaluation of UNESCO, in which you participated actively. The evaluation highlighted the assets and strengths of UNESCO's strategic positioning. The very concrete support for our programme activities in very specific areas, which you express today is a new sign of trust, that calls on us to further increase our efforts.”

Per Egil Selvaag, Norway's Ambassador and Permanent Delegate to UNESCO declared, “UNESCO has an extremely important role to play as custodian of some of the most fundamental universal values the UN is entrusted to safeguard. By supporting UNESCO, we support human rights, freedom of expression, our World Heritage, healthy ocean and the right to education. We encourage all countries to contribute to UNESCO’s strategic transformation, aiming at making the organization even more fit for purpose.”

The Director-General took the opportunity to present the official certificate of the inscription of Nordhordland as a member of UNESCO Biosphere Reserve Network, which marks Norway's renewed commitment to the programme after 22 years of absence.