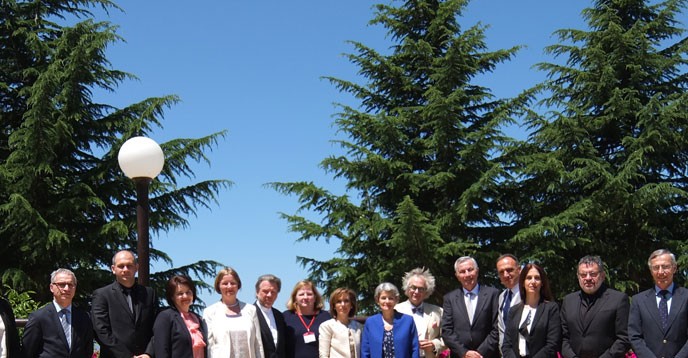 Irina Bokova, Director-General of UNESCO, opened the first meeting of the Council of Ministers of Culture of South-East Europe “Enhancing Culture for Sustainable Development”, which took place in Ohrid on 27 and 28 June under the chairpersonship of Elizabeta Kanchevska-Milevska, Minister of Culture of The former Yugoslav Republic of Macedonia. The meeting was organised with the support of the UNESCO Regional Bureau for Science and Culture in Europe, Venice (Italy).


In her address, Irina Bokova welcomed the ministers and high level decision-makers in attendance, stressing the importance of the initiative’s message and timing, and calling on the countries of South-East Europe to play a decisive role in promoting the power of culture in the post-2015 sustainable development agenda.

This was the first meeting of the new, unified platform for ministerial cooperation in the region, following the decision taken the previous year by the ministers of culture of South-East European (SEE) countries to merge 2 previous cooperation platforms that had operated side by side for almost a decade. In Ohrid, ministers and heads of delegation in attendance approved the statute of the new programme, which will represent the leading initiative for cultural cooperation in SEE.

The event consisted of 2 sessions – a preparatory meeting of officials (27 June) followed by the meeting of the ministers and heads of delegations (28 June). The new “Regional Strategy for Cultural Cooperation in South East Europe” – dubbed the “Ohrid Strategy” – approved on the second day, outlined priority areas for future cooperation and modalities of action to enhance culture as a driver for sustainable development.

As part of the Strategy, participants underscored the priorities for cultural cooperation in South-East Europe: improving the management of cultural heritage for inclusive economic development and environmental sustainability, fighting the illicit trafficking of cultural property, safeguarding ICH, fostering creativity and diversity, and enhancing cultural and arts education. Activities implemented in these fields shall aim at reinforcing cooperation, developing institutional and professional capacities, improving legal and institutional frameworks, promoting culture for development through education and regional partnerships. The Council undertook to assess activities relating to the regional cooperation process and adapt the Strategy to allow for changing circumstances.

The conference also provided an opportunity for Irina Bokova to hold bilateral meetings with the ministers of culture of Serbia and The former Yugoslav Republic of Macedonia, as well as with the Secretary-General of the Regional Cooperation Council (RCC). In particular, the meeting with the RCC paved the way for the establishment of a cooperation programme focusing on the implementation of the Culture for Development Indicators Suite in Albania, Serbia, and The former Yugoslav Republic of Macedonia, to be financed by the RCC and managed by the UNESCO Venice Office.

At the end of the meeting, Turkey took over the rotating yearly chairmanship of the Council of Ministers of Culture of South-East Europe – Enhancing Culture for Development, and will host the next meeting of the Council in 2015.

The meeting marked the 10th anniversary of the regional cooperation process that began in Mostar (Bosnia and Herzegovina) in 2004, on the occasion of the opening of the reconstructed Old Bridge, when the governments of Bosnia and Herzegovina and Italy jointly convened the first Ministerial Conference on Cultural Heritage in South-East Europe, which then developed into a yearly meeting supported by UNESCO.

The meeting in Ohrid was organized within the overall framework of UNESCO’s global initiative “Culture: A Bridge to Development”, which aims to develop innovative solutions for the safeguarding of culture in all its forms, as a tool for sustainable social, economic and human development.