Amman and Irbid, 21 March 2018 – On one Thursday morning this month, students in the new digital media course at Yarmouk University’s Faculty of Mass Communication were discussing how to use Piktochart – a free online tool for creating infographics and other visual storytelling techniques. Arwa Alserhan and Amani Al Zureigat, second and third year journalism majors respectively said that they are getting more practical hands-on experience in the classroom. “In the past, everything was about theory; now we can practice some new skills such as how to produce infographics,” added Amani.

Arwa and Amani are two of about 25 students enrolled in the course. They are the first batch of students who are being introduced to the updated course content developed as part of the UNESCO implemented and EU funded “Support to Media in Jordan” project, and using one of the three new computer labs provided by the European Union.

Dr. Ali Zenat, professor of the digital media course at Yarmouk University has been teaching for six years. “The changes are very positive. Now the course has between 20-25 students, as opposed to 60 or more like in the past. This is much more manageable. It is also now a mandatory and not elective course and we introduced concepts of digital journalism including teaching tools like ‘timeline’ and introducing infographics,” he said after the class. 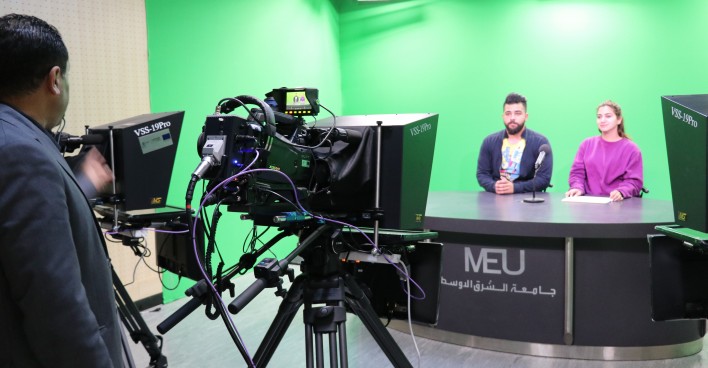 The new course is part of the extensive revision to the entry-level journalism education that UNESCO has been working on with implementing partner CFI since 2016 at Yarmouk University in Irbid and Middle East University in Amman. As a result of this work, three new courses (Digital Media, Journalism Ethics, and Investigative Journalism for Radio and TV) have been approved as additions to the official curricula. In total, about 1200 students will benefit each year, a feat that has not been achieved before in Jordan. The new courses were developed to address emerging industry needs and reach international standards of journalism education.

To complement the new curricula, the European Union contributed brand new equipment – several media labs, a new TV and radio studio and new equipment for Yarmouk FM at Yarmouk University, and new TV and radio studios and computer labs at MEU. The generous donation of equipment is part of a larger 1.5 million euro contribution by the EU to updating the equipment of local community radio stations and universities around Jordan.

At MEU last week, 4th year journalism student Lour Madanat was training in the new Media Center with lab trainer and former student Mahmoud Alwartwan.  “The new equipment is very good, it’s definitely very real to the outside world and it reflects what is out there in the industry,” Lour said.

“And now with the new study plans, we have more practical courses. This is better for the students because we can actually learn things we will be using when we graduate and how to work in the field,” she added.

Dr. Ashraf al Manaseer, manager of the Media Centre at MEU and professor of media, expressed his gratitude to UNESCO and the EU for the donation of equipment in particular. “We will now continue training our students on the new equipment; it’s a great improvement and benefit to our university.”