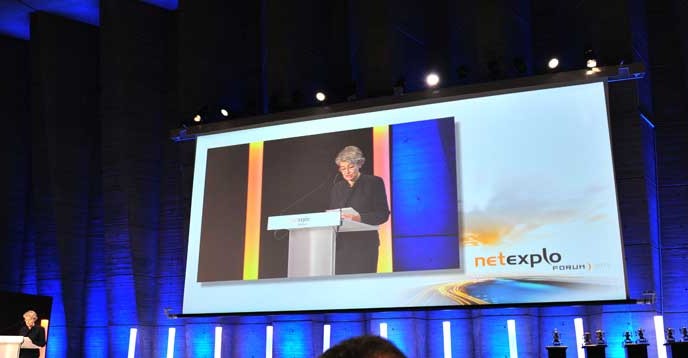 On 4 February, UNESCO Director-General, Irina Bokova, and the French Minister of Digital Affairs, Axelle Lemaire, opened the 8th session of the Netexplo Forum, held at UNESCO Headquarters in Paris.


The Director-General highlighted the importance of “digital culture” and the vital role of technology in our world today. Calling for more investment in men and women, as well as in their human rights and dignity, the Director-General said: “technology can never be an end in itself – it must be a means to supporting the full development of every person.”

“We need renewed efforts to bridge digital divides, to reach the unreached, to ensure every man and woman -- especially women and girls – has the skills and opportunities they require to make the most of change,” she continued,emphasizing that this calls for planning and action, and that it is especially important in this turning point year for the Millennium Development Goals, as Member States shape a new global sustainable development agenda for the next 15 years.

“Digital innovation and capacity can be leverage of democracy”, but there is “the need to address the human challenges”, which are “at the heart of this digital evolution”, said the French Minister of Digital Affairs. She also expressed the wish that at this time, “digital innovations encourage us to open our borders to see new horizons”.

Thierry Happe, co-founder of Netexplo Observatory, recalled that a large number of the highlighted projects “are part of a concept that is called Smart Life”, where digital innovations help to "improve relations between people, between people and their direct habitat, and more generally with their environment".

Organized in partnership with UNESCO, the Netexplo Forum 2015, held from 4 to 5 February 2015, is a unique global event to identify digital innovation worldwide. During the opening ceremony, “Netexplo Women Pioneers” initiative was launched, in order to better identify and promote female talent in the digital world.