National launch of the BEAR II project in Uganda 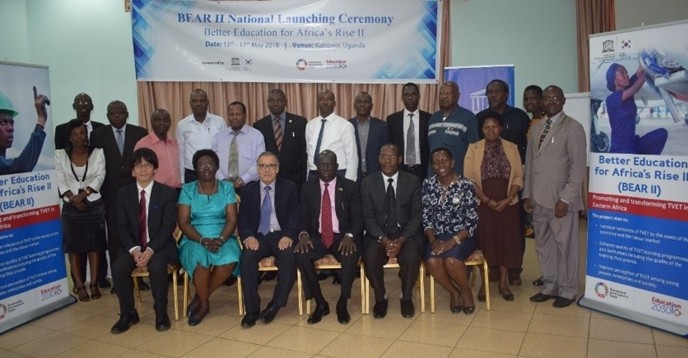 On 15 May 2018, Uganda launched the Better Education for Africa’s Rise (BEAR II) project, a joint initiative of UNESCO and the Republic of Korea to cooperate with five countries of Eastern Africa, namely Ethiopia, Kenya, Madagascar, the United Republic of Tanzania and Uganda, in strengthening their technical and vocational education and training (TVET) systems.

The five-year project is currently in its inception phase and aims to enhance the relevance, quality and perception of TVET systems in the beneficiary countries through specific sectoral interventions. In Uganda, the BEAR project will be concentrating its efforts on post-harvest management and agro food processing.

Agriculture is the backbone of Uganda’s economy and by supporting TVET in this sector, both the employment opportunities and economic development will be strengthened.

During his remarks, Mr. Odok Ocheng highlighted the need for better cooperation among all TVET stakeholders and emphasized the need for innovation. He encouraged Ugandans to be creative and productive in improving the relevance, quality and perception of the national TVET systems.

The BEAR project is a five-year UNESCO project supported by the Republic of Korea, to be implemented until 2021 in selected countries of Eastern Africa, namely Ethiopia, Kenya, Madagascar, Uganda and the United Republic of Tanzania. It contributes to the global efforts for implementing the Education 2030 Agenda, the Continental Education Strategy for Africa (2016 – 2025), and the UNESCO Strategy for TVET (2016 – 2021). The first phase of the BEAR project provided support to the Democratic Republic of the Congo, Zambia, Malawi, Botswana and Namibia.