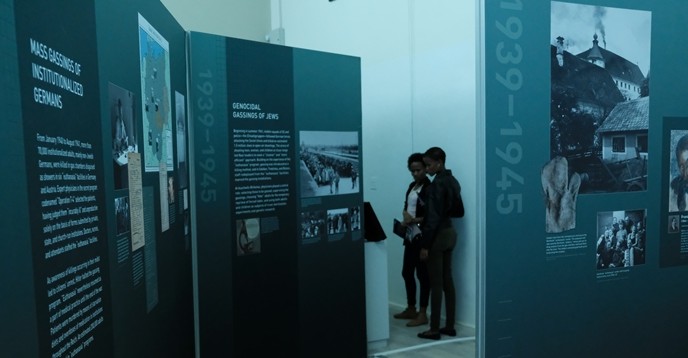 With the support of UNESCO and the U.S. Holocaust Memorial Museum (USHMM), a team of Namibian educators from the Museums’ Association of Namibia (MAN) has developed an impactful project in support of education about the Holocaust and genocide in Namibia:

To kick off the project, the team inaugurated the USHMM traveling exhibition entitled “Deadly Medicine: Creating the Master Race” on 24 April 2019 at the Gallery of the Namibian Arts Association in Windhoek. The event was attended by students, lecturers, and staff from the National Institute for Educational Development (NIED) and representatives of the UNESCO Office in Windhoek. The exhibition was brought to Namibia on an initiative of the MAN and the South African Holocaust and Genocide Foundation, with the support of International Holocaust Remembrance Alliance (IHRA) and the USHMM. It explores the Nazi regime’s pseudo “Science of Race” and its implications for medical ethics and social responsibility and challenges viewers to reflect on the present-day interest in genetic manipulation that promotes the possibility of human perfection.

“There is a significant historical connection between the Nazi’s ‘Science of Race’ and the history of racial discrimination in Namibia”, explains Ndapewoshali Ashipala from the Museums’ Association of Namibia. “Some of the initial ‘research’ that later informed the Nazi’s pseudo-science and backed the Nazi ideology of racial superiority, was conducted in today’s Namibia under German colonial rule. Some practices developed at this time were later also applied in the Apartheid regime.” Jeremy Sylvester, Director of the Museums’ Association of Namibia, underlined this connection during his address at the inauguration of the exhibition, pointing out the role of German anthropologist and doctor Eugen Fischer: “Fischer came to Namibia and conducted research in Rehoboth, which was later used to reinforce the German ‘concept of race.’”

Before coming to Namibia, the exhibition was displayed by the South African Holocaust and Genocide Foundation in various locations in South Africa in 2018.

Educational work around the exhibit was supported by UNESCO and the USHMM through the International Conference on Education and the Holocaust (ICEH), a capacity-building programme organized jointly by both institutions in 2015 and 2017. The Conference aims to globally advance the institutionalization of education about the Holocaust and genocide. Namibia participated with a team of educators in both conferences and was joined by a South African team in 2017.

As direct outcome of their participation in the first ICEH in 2015, the Namibian team is now working on finalizing its exhibition on the 1904 genocide against the Herero and Nama, entitled “The Ovaherero and Nama Genocide– Learning from the Past”, which received support from the Ministry of International Relations and Cooperation. The exhibition will be displayed in all 14 Namibian states and visited by school groups. To accompany the exhibition, the team is  developing a teachers’ handbook, which will also be made available for regional education departments and will serve to supplement the current Namibian school curriculum.

Education about the Holocaust and genocide , Global citizenship education
Namibia