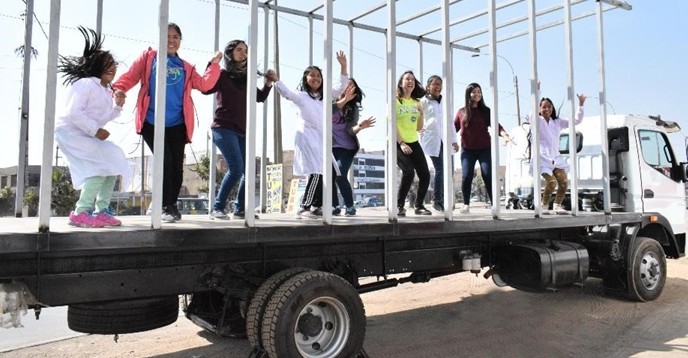 “These are ordinary girls doing extraordinary things,” says Johanna Johnson, co-founder and director of MaCTec, laureate of the 2017 UNESCO Prize for Girls’ and Women’s Education.

A year after winning the Prize, Johanna describes how MaCTec is continuously welcoming new girls to the Academy. Each year, forty students are chosen by lottery and this year there were over 900 applications. MaCTec has also made strides to bring science education to rural girls in Peru, as they will soon be launching their new mobile science museum.

“There is huge demand for our workshops. Girls who don't necessarily do well in formal school flourish here. When we have visiting scientists, girls do not want to take a lunch break in case they miss something.” Last month MaCTec welcomed Dr Saad Bhamla, a Professor at Georgia Institute of Technology-USA and a MaCTec scientist, who conducted a workshop on the concept of freezing time.
“Often, we find that although a child is born with innate curiosity, as they grow he or she loses it, or schooling may often knock it out of them,” said Johanna. “We want to nurture the innate curiosity of girls and build beautiful minds to create a better world.”

Johanna explains that the most important learning MaCTec imparts is critical thinking and how to think as a scientist. "We are less about creating scientists than opening doors so that the girls are happy to choose a life that fulfils them, to explore the planet and to conquer the world!” she said.

MaCTec will soon open the doors to their new mobile science museum. They are planning to equip a truck to operate as a science museum for young learners, which will enable their project to reach far off rural areas and benefit even more girls.

“Peru is blessed with amazing biodiversity," said Johanna. "So, we plan to take the bus to Piura which is more than 900 kilometres from Lima and train girls at the mobile museum by exploring and learning about the flora and fauna indigenous to their area.” MaCTec teaches the student how to build low-cost equipment invented by MaCTec scientists, including paper microscopes (Foldscope) and paper centrifuges.

“At MaCTec, every workshop is a voyage of discovery. Along the way, girls demonstrate their creativity and imagination, traits not necessarily related to their schooling qualifications. The girls inspire us and we are more than repaid,” she said.

Valeria from Huancayo, a rural area around 300 kilometres from Lima, has been attending MaCTec since 2015, taking an 8-10-hour bus ride with her mother every Friday to attend the workshop. With her mentor and co-founder of MaCTec, Dr Javier Navarro, Valeria is exploring the adaptation of ancient bacteria to conditions mimicking Mars. Valeria has set up a laboratory in her own house to carry out her investigations. “She has serious ambitions to be an astrobiologist,” said Johanna, “and she is a great inspiration for other Peruvian girls”.

Another MaCTec girl, 11-year-old Izumi, has built a large plastic 3D atomic model of the human interleukin-8, a key protein in the mechanism of inflammation. Izumi involved her whole family in the project and has featured her work in several academic forums, including at the University of Applied Sciences in Peru.

“In the future, we not only dream about the science museum bringing its message everywhere in the country, but of MaCTec being able to welcome any child who can come through the doors and say, “Today I want to explore the stars” and we will say “Come in, MaCTec is your home”.

MaCTec, the Mini Academy of Science and Technology, empowers girls from diverse ethnic and socio-economic backgrounds with quality science education, nurturing their minds and appetite for learning. It offers free workshops covering everything from quantum mechanics to genetics and attracts scientists from all over the world to lead workshops. MaCTec has developed the Discovery-Peer Learning (DPL) method based on stimulating enquiry and encouraging girls to challenge each other and the scientists.