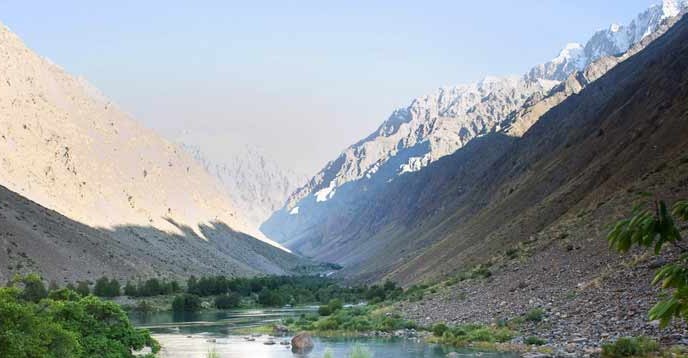 
Tajikistan National Park (Mountains of the Pamirs) covers more than 2.5 million hectares in the east of Tajikistan, at the centre of the so-called “Pamir Knot”, a meeting point of the highest mountain ranges on the Eurasian continent. It consists of high plateaux in the east and, to the west, rugged peaks, some of them over 7,000 meters high, and features extreme seasonal variations of temperature. The longest valley glacier outside the Polar region is located among the 1,085 glaciers inventoried in the site, which also numbers 170 rivers and more than 400 lakes. Rich flora species of both the south-western and central Asian floristic regions grow in the Park which shelters nationally rare and threatened birds and mammals (Marco Polo Argali sheep, Snow Leopards and Siberian Ibex and more). Subject to frequent strong earthquakes, the Park is sparsely inhabited, and virtually unaffected by agriculture and permanent human settlements. It offers a unique opportunity for the study of plate tectonics and subduction phenomena.

Mount Etna (Italy) is an iconic site encompassing 19,237 uninhabited hectares on the highest part of Mount Etna, on the eastern coast of Sicily. Mount Etna is the highest Mediterranean island mountain and the most active stratovolcano in the world. The eruptive history of the volcano can be traced back 500,000 years and at least 2,700 years of this activity has been documented. The almost continuous eruptive activity of Mount Etna continues to influence volcanology, geophysics and other Earth science disciplines. The volcano also supports important terrestrial ecosystems including endemic flora and fauna and its activity makes it a natural laboratory for the study of ecological and biological processes. The diverse and accessible range of volcanic features such as summit craters, cinder cones, lava flows and the Valle de Bove depression have made the site a prime destination for research and education.

The 714,566 hectare site comprises two distinct parts: the dormant volcanic Pinacate Shield of black and red lava flows and desert pavements to the east, and, in the west, the Gran Altar Desert with its ever changing and varied sand dunes that can reach a height of 200 metres. This landscape of dramatic contrast notably features linear, star and dome dunes as well as several arid granite massifs, some as high as 650 metres. The dunes emerge like islands from the sea of sand and harbour distinct and highly diverse plant and wildlife communities, including endemic freshwater fish species and the endemic Sonoran Pronghorn, which is only to be found in northwestern Sonora and in southwestern Arizona (USA). Ten enormous, deep and almost perfectly circular craters, believed to have been formed by a combination of eruptions and collapses, also contribute to the dramatic beauty of the site whose exceptional combination of features are of great scientific interest. The site is also a UNESCO Biosphere Reserve.

A total of five natural sites have been inscribed during this session (Xinjiang Tianshan, China; and Namib Sand Sea, Namibia). Mount Kenya-Lewa Wildlife conservancy (Kenya), was inscribed as an extension added to Mount Kenya Natural Park / Natural Forest. The World Heritage Committee is pursuing its work with the nomination of cultural sites as well as mixed natural and cultural sites. The 37th session, taking place in Phnom Penh, will close in Angkor on 27 June.