For the first time, UNESCO has been evaluated by the Multilateral Organization Performance Assessment Network (MOPAN), an independent body of 18 countries* that assesses the effectiveness of UN agencies.

The results, which were presented on Monday 1 April 2019 to the Member States in the presence of the Director-General, at a meeting organized by Norway, the institutional lead country for MOPAN, underline a "clear strategic vision", reaffirm the "central role of UNESCO in achieving the Sustainable Development Goals ", particularly in regard to education, and underline the "rare" expertise of the Organization in its fields of competence and its degree of authority "which allows it to influence governments around the world. " They highlight in particular the effectiveness of the Organization given the budget cuts imposed since 2012, and the relevance and aim of its "normative and programmatic" roles. 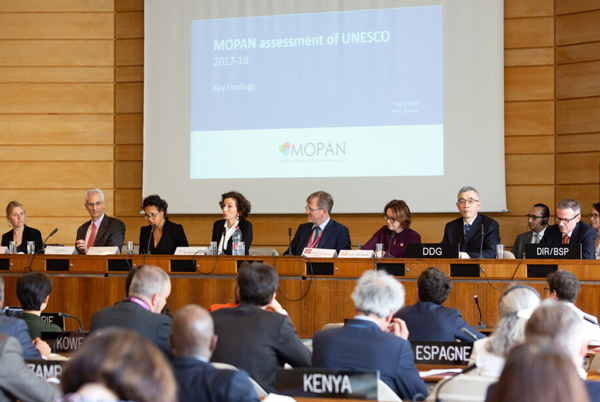 "This is a very positive assessment that UNESCO can be proud of and that encourages the efforts of all the staff," said the Director-General, Audrey Azoulay.

As for the areas of improvement mentioned, the Director-General underlined their convergence with the diagnosis made in the context of the strategic transformation, as is also stated in the report: "UNESCO understands very well these challenges and is working to position itself to be more efficient and effective in the future through ongoing reforms." In that regard, as the MOPAN assessment precedes the Strategic Transformation it will serve as a good baseline against which to assess progress, said both UNESCO Director-General and Head of MOPAN.

The recent external evaluation undertaken by the Multilateral Organization Performance Assessment Network (MOPAN), an independent body of 18 countries*, underlines that UNESCO’s progress in mainstreaming gender throughout its operations is particularly strong.

The evaluation confirmed that stakeholders value UNESCO’s contribution to promoting gender equality, with 98% of the 122 partners surveyed recognizing the Organization’s impact in this regard. It underlines that policies, procedures and guidance are in place to require UNESCO staff to integrate a gender analysis in interventions. The report found strong evidence of the mainstreaming of gender in UNESCO’s education, sciences, culture and communications programmes. It also noted that the Organization produces tools to analyze gender equality that are used by other agencies and countries. Inter-sectoral cooperation on gender equality issues, for example on women in science, was judged innovative and robust.

The report highlights the designation of gender equality as one of UNESCO’s two global priorities in the Medium-Term Strategy as a landmark decision. It identifies several elements as critical for the success. Among them are: the Gender Equality Action Plans (2008-2013 and 2014-2021), which direct how gender is mainstreamed in the planning, implementation, monitoring and reporting of all UNESCO’s programmes; accountability for all for promoting gender equality; UNESCO’s Division for Gender Equality, located in the Cabinet of the Director-General, which fosters an inclusive approach to gender and a focus on gender-transformative action as the driver for gender mainstreaming; and the presence of a network of 150 Gender Focal Points for back-stopping in each sector and field office. Specific programmes, such as those focusing on girls’ education in general and on STEM in particular, gender-sensitive media indicators and the training of women journalists, and the establishment of innovative partnerships with the private sector and civil society were also highlighted in the evaluation.

The challenges identified include UNESCO’s difficult financial context, the small size and lack of field presence of the Division for Gender Equality, and the need to address underreporting on gender equality-related impacts by integrating gender targets into the design of all activities and regularly updating the gender marker in programming documents.

UNESCO’s senior management team is addressing these issues, including through the strategic transformation process established by the Director-General.

The MOPAN assessment of performance covers UNESCO’s entire Secretariat in the field and at Headquarters, including all Sectors, crosscutting units such as the Division for Gender Equality, corporate services and the Category 1 Institutes.